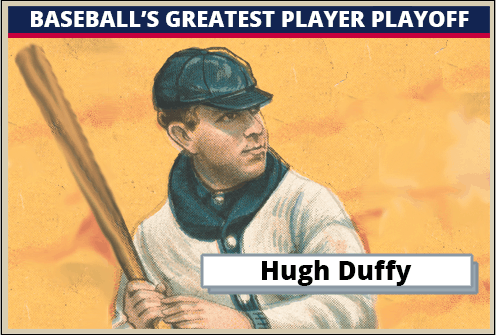 An interesting mix of eras battle for survival with Hall-of-Famer Hugh Duffy as the top seed. Fellow HOF-er (as the Babe Ruth-era manager) Miller Huggins joins the fight against Carl Crawford, Thurman Munson, Danny Tartabull, Tommy Harper, Mark Teixeira, and Brady Anderson. Facing elimination, only a top 4 finish guarantees a slot in Round 5.

Hugh Duffy really showed up in this all-important elimination round, joining the century club with 102 wins. He easily outdistanced the others, with Carl Crawford 21 games behind in second place. Mark Teixeira was the top home run producer and third-place finisher and Danny Tartabull passed Miller Huggins in the final week to take fourth. For Huggins, Munson, Harper, and Anderson, this is where the journey ends.