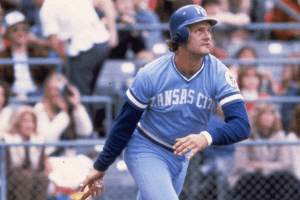 We are now over a fifth of the way through the first round. George Brett is our only Hall-of-Famer and he faces off against Omar Vizquel, Doc Cramer, Mark Teixeira, Lefty O’Doul, Ralph Garr, Sam Wise, and Bobby Murcer.

Top Seed George Brett had a long and distinguished career with the Kansas City Royals that saw him rack up impressive career totals across a broad range of offensive categories. He totaled more than 3,000 hits, 600+ doubles, 300+ home runs, and a lifetime average of .305, all at a time when pitching dominated baseball.

Omar Vizquel may yet get elected to the Hall-of-Fame. He had a 24-year career of solid production that almost got him to 3,000 hits. Known mostly for his terrific fielding ability – his eleven Gold Gloves attest to that – he nonetheless put up some outstanding numbers that helped him qualify for the tournament.

Doc Cramer played in the bigs for 20 years and retired with over 2700 hits and a .296 batting average.

The most recent hitter in today’s league is three-time Gold Glove first baseman, Mark Teixeira. However, it is his power that landed him in the tournament. 408 doubles and 409 home runs put him in a rarefied company as one of only 24 hitters to achieve that feat.

He only had seven years as big league regular, but in that short time Lefty O’Doul made his mark: Two batting titles and a career batting average of .349.

Growing up in Cleveland, my first Strat-o-matic game set featured the Indians and the Atlanta Braves. On that team was Ralph Garr and his league-leading .366 batting average. It was his lifetime .306 average that qualified him for the tournament.

Sam Wise was a nineteenth-century player who managed to hit 112 career triples, mostly with the Boston Beaneaters.

For some reason, Bobby Murcer was always a favorite. This five-time all-star gets an invite.

Lefty O’Doul spanked the rest of the league on the strength of a .257 average vs a league average of .213, winning 16 straight at one point and never losing more than 3 in a row.

Despite owning the Top 10 Strikeout leaders, one Sam Wise managed a 3-HR game, with 8 RBI. One Roger Clemens struck out 14 batters in 7 2/3 innings and there were 3 no-hitters, two by Tom Seavers and one by a Clemens.

O’Doul and Wise are joined by George Brett and Bobby Murcer in Round 3. The others head to Round 2 for a second chance.