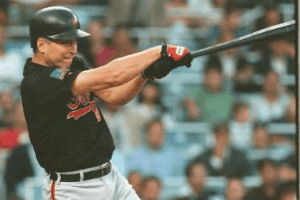 Best known for his “Iron Man” streak of 2632 consecutive games played, and to a lesser extent, his 8,264 consecutive innings, Cal Ripken had an extremely productive career spanning 21 seasons. He won Rookie of the Year honors, two MVP trophies, and was named to 19 All-Star teams. He even picked up a couple of Gold Gloves for good measure. Along the way he totaled 3184 hits, among them 603 doubles and 431 home runs, while batting a respectable .276.

Hugh Duffy‘s lifetime average of .326, 119 triples, and 574 stolen bases all contributed to his ranking in the playoff but he is better known for another reason. In 1884, Duffy had a season for the ages, batting .440 for the National League’s Boston Beaneaters, a mark that may never be equaled. Admittedly, three other batters topped .400 and the league hit .309, but still…

Hughie “Ee-Yah” Jennings hit .312 over his twelve years as a regular, which was good enough to get him into the tournament but the stat I love about him is his 287 lifetime hit by pitches. Jennings never really had the stats to make the Hall-of-Fame but was a pretty good player and extremely popular manager of the Detroit Tigers for almost two decades and was selected by the Veterans Committee in 1945.

Rarely used regularly and bouncing between first base and all the outfield positions, Joe Harris still managed ten years in the majors, hitting .317 with six different teams. He lost a year and half to World War I and another two in contract disputes – he played for “outlaw” teams during the interim – so one wonders what could have been.

I only knew of Harlond Clift because of the writings of Bill James (BTW, I highly recommend his Baseball Abstract… great writing and lots of good stories) who called him the first “Modern” third baseman: good fielding and power. His lifetime stats are good; a .272 batting average with 178 home runs in a twelve-year career. I guess splitting your time between the St. Louis Browns and Washington Senators is almost as good as being in the witness protection program. What qualified him for the playoff was his 1007 career walks which boosted his OBP to .390.

An excellent fielder and accomplished manager, Charlie Grimm was also a pretty fair hitter during his 20-year playing career, averaging .290 with the Pittsburgh Pirates and Chicago Cubs (there were also a dozen games with the Philadelphia Athletics in 1916).

The 2010 MVP and five-time All-Star, Josh Hamilton hit .290 with 200 homers in his nine years before knee problems forced him out of the game. He’s in the tournament based on his OPS – On-base Plus Slugging.

All-time, single-season batting champion, Hugh Duffy led a competitive season. Joe Harris led in batting with .225 vs. the league’s .205 and the top Hughie Jennings led the league with .268.

In one game Charlie Grimm beat up on Harlond Clift by a score of 17-1 with 21 hits and in another Duffy shutout Grimm 14-0. There were three no-hitters, including a 4th of July perfect game by Cy Young against Grimm. Additionally, a Tom Seaver had 11 innings of no-hit ball in a contest against the Clift team.

Duffy, Jennings, Harris, and Clift are joined by Josh Hamilton and his .500 winning percentage in Round 3. The others head to Round 2 for their second chance.

Remember to sign up for the email list for the occasional update and recap so you don’t miss out on the results!