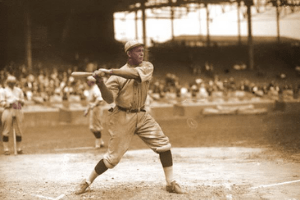 Rogers Hornsby has a legitimate chance in this tournament and I expect him to at least make the finals. Two triple crowns and seven batting titles combined with excellent power and the second-highest career batting average at .358 makes him the obvious choice as the greatest right-handed batter in major league history.

Sportsman Park in St. Louis in the 1920s must have been quite a place. While Hornsby was racking up .400+ seasons for the Cardinals, George Sisler was doing the same for the Browns. A lifetime .340 average makes him a tough competitor.

New York baseball in the 1950s had three major league teams: the Yankees, Giants, and Brooklyn Dodgers and they all had hall-of-fame center fielders: Willie, Mickey, and The Duke – Mickey Mantle, Willie Mays, and Duke Snider. Snider had solid power numbers and a .295 lifetime average over an eighteen-year career.

Jack Clark is exactly the kind of hitter whose performance I wanted to see in this tournament. “Jack The Ripper” had a lot of walks to off-set his batting average and good power numbers during the pitching-rich 1980s.

Omar Moreno made the tournament on the strength of his 487 career stolen bases. We’ll see how important speed is.

Like Moreno, Marquis Grissom is in based on his 429 stolen bases. He also 227 career home runs to go along with his four Gold Gloves.

Brady Anderson was a solid player and great leadoff man for the Baltimore Orioles. In 1996, he had a career year with 50 home runs and a 1.034 on-base plus slugging.

Speaking of OPS, Carlos Gonzalez, who is still playing, made the tournament by placing among the lifetime leaders in that category.

He’s one of my favorite players and Rogers Hornsby took this one in the face of some decent competition. He placed first on the strength of a +236 run differential and an OPS of .696 vs the league’s .569. George Sisler hit .253 to Hornsby’s .243 while the rest of the league combined for .194.

There were 5 no-hitters, including a perfect game by a Tom Seaver.

Hornsby and Sisler are joined by Duke Snider, Jack Clark, and Carlos Gonzalez who finished in fifth place but had a winning percentage over .500. They head to Round 3 while the others will head to Round 2 for a second chance.