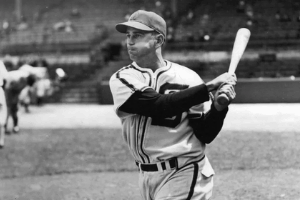 Things start getting messy here; I found out I had accidentally included Ted Simmons in the playoff in two different leagues. Coupled with the George Kelly confusion and the whole George Burns / George H. Burns fiasco, I found myself needing rather more invitees than I expected. Plus I was so close to 600 total participants, so, just like Doc Brown, I figured, “What the Hell.”

Hall-of-Famer Luke Appling is our top seed and he faces what could prove to be some tough competition. He will be battling against Joe Vosmik and 18th Century stars Ross Barnes, Fred Carroll, and Paul Hines. Just to make things interesting, he will also see stars of the 1960s and 70s Andre Thornton, Tony Conigliaro, and Thurman Munson.

From 1930 to 1950, except for a couple of years during World War II, citizens of Chicago could count on Luke Appling manning the shortstop position at Comiskey Park for the White Sox. A career .310 hitter, he won a couple of batting titles (with a .388 average in 1936) and was named to the American League All-Star team seven times. Although the war kept him from making 3000 hits, he still managed 2749 with 440 doubles and 102 triples. He was elected to the Hall of Fame in 1964.

In ten seasons as a regular (thirteen overall), Joe Vosmik managed a .307 batting average. He rapped out 1682 hits, including 335 doubles and 92 triples, leading to a very reasonable .807 OPS.

Baseball pioneer Ross Barnes is considered by some to be the most dominant player of the 1870s and might just be the best hitter you have never heard of. How about these numbers: a lifetime batting average of .360! A season batting average of .400 or better four times! That was good enough for me to give him an invite to the playoff.

So why don’t we know about him? Well, Barnes only played for nine seasons, spread out over eleven years, and the first five were with the Boston Red Stockings of the National Association. Additionally, due to the short seasons, he only totaled about 2500 plate appearances and he is not in the Hall-of-Fame. He fell short of the required ten seasons but because his statistical dropoff coincided with a change in the “fair/foul” rule, the prevailing opinion was that that was the cause. Actually, he contracted a mysterious illness that sapped his strength and led to his retirement from baseball.

Another early player, Fred Carroll played one season for the American Association Columbus Buckeyes and then spent the seven seasons in Pittsburgh playing for the AA Alleghenys, National League Alleghenys, Players League Burghers, and National League Pirates. He hit .284 and is in the tournament based on being in the top 150 in OPS+.

As we are now firmly in the “Players Tim Liked” phase of the playoff, it is my great pleasure to introduce Andre Thornton. A legitimate power threat, “Thunder” hit 253 home runs in his fourteen big league seasons. He carried a .254 average with enough walks to boost his OBP a hundred points higher. And he lived just down the street from my aunt and uncle!

Tony Conigliaro fits into the “might have been” category. Playing for his hometown Boston Redsox, he showed tremendous talent, hitting a teenage record 24 home runs as a nineteen-year-old. By age 22 he had 100 homers at a younger age than anyone except Mel Ott. Alas, he liked to crowd the plate and suffered several fractures. During the 1967 pennant race, he was struck in the face by a Jack Hamilton fastball, ending his season. He missed all of 1968 but made it back to the majors in 1969. He had two more good seasons before headaches and poor vision forced him to retire. Still, he had 166 homers and an OPS of .803.

An excellent defensive catcher, Thurman Munson was no slouch at the plate. A .292 hitter in his eleven-year career, Munson also hit 113 home runs. Named Rookie of the Year in 1970, he also picked up an MVP trophy in 1976 and was named to seven All-Star teams, winning three Gold Gloves along the way. His Hall-of-Fame-potential career was cut short when he was killed in a piloting accident on an off-day in 1979.

In a tight race – a tight season, really – Fred Carroll came out on top. The Luke Appling team led in batting average with .260 while the league hit .243 as a whole.

Carroll is joined by second-place Tony Conigliaro, Thurman Munson, and Joe Vosmik and Luke Appling who tied for fourth place. The others get a second chance in Round Two.