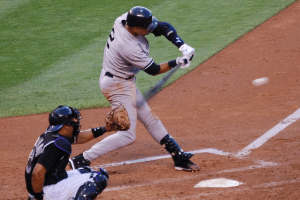 Any fan of current baseball will at least be familiar with Derek Jeter. A fourteen-time All-Star for the New York Yankees, Jeter rang up some impressive numbers in his 20-year career:

As of this writing, we are waiting on the voting for “The Hall” in his first year of eligibility. Playing his entire career in a major media market and running up statistics like this would seem to indicate that he is a lock for first-ballot inclusion.

It took Richie Ashburn a long time to make it to Cooperstown. A great fielding centerfielder, he spent his career in the shadow of Willie, Mickey, and The Duke (everybody sing with me!). And since his .308 batting average and .396 OBP did not come along with a bunch of home runs, he never got the acclaim that he deserved during his 15-year career.

Tommy Leach played shortstop and centerfield mostly for Pittsburgh in the early part of the 1900s, setting the table for Honus Wagner in the Pirates lineup. A lifetime .269 hitter, he was very fast and hit 172 triples and 49 inside-the-park home runs in his career.

The owner of a .324 lifetime batting average, Babe Herman was a star player for the Brooklyn Robins in the second half of the 1920s. He was also sort of the poster child for the beginning of the “daffy Brooklyn” motif that has stuck around for almost a century. One of these days, I’ll have to write about the time he hit a double into a double play.

Jim Wynn is someone I am very interested in seeing how he performs in this playoff. “The Toy Cannon” played his key years for the Houston Colt .45s / Astros and in Los Angeles for the Dodgers, both denizens of notorious pitcher-friendly parks. He qualified based on his 1224 bases-on-balls.

Tommy Harper has a special place in my memory. The back of both the 1970 Seattle Pilots and 1971 Milwaukee Brewers team baseball cards had the team leaders in offensive and pitching statistics and his name was all over that card. His 408 career stolen bases are what got him here.

Jeromy Burnitz‘s 14-year career saw him launch 315 round-trippers, good enough for a spot in the playoff.

He only had six years as a regular but during that time George Stone hit .301. He is in the tournament because he is among the leaders in Offensive Winning Percentage.

Herman5 had a 21-game hitting streak and George Stone8 had two 5 for 5 games during the season. There were two no-hitters, including a 10-inning gem thrown by Derek Jeter’s Roger Clemens against Jimmy Wynn.

Herman, Stone, Ashburn, and Jeter head to Round 3 while the others try their luck in Round 2.