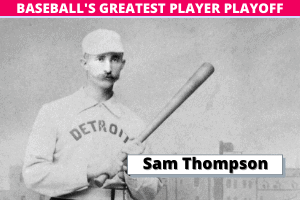 It was no great surprise that Tony Gwynn set the pace in batting average but Reggie Smith flexed his muscles and joined the select group of hitters to achieve a 100+ win season. He hit well and enjoyed above average pitching results. It will be interesting to see if he can repeat his performance in Round 5. Also qualifying were top seed Sam Thompson and Roy Sievers. The others get a seccond chance in Round 4.