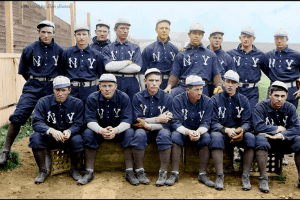 Turn-of-the-century shortstop Herman Long is the top seed this season. He will try his skills against Hall-of-Famers Harold Baines, Eddie Murray, and Ivan Rodriguez, as well as Tino Martinez, Tommy Harper, Gary Pettis, and Paul Radford. Only the top 4 are guaranteed to advance to Round Three.

In a season that was heavy with stolen bases – four teams had 476 or more – Herman Long came out on top with a 3-game margin over the second place Eddie Murray. Tommy Harper and Paul Radford also qualified for Round Three. Despite leading all teams in batting average, Ivan Rodriguez did not make the cut. He, fellow Hall-of-Famer Harold Baines, Tino Martinez, and Gary Pettis, are finished.