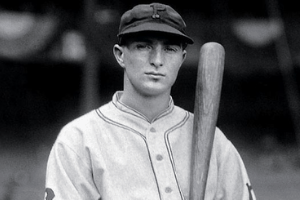 Paul Waner is our only Hall-of-Famer as we continue into Round One. He faces modern players Jimmy Rollins and Magglio Ordonez as well as old-timers Stuffy McInnis, Mike Donlin, Buck Freeman, Gary Pettis, and Ed Swartwood.

This is not meant to take anything away from him, but Paul Waner kind of exemplifies the opposite of what we think of when it comes to World War II and major league baseball; unlike players who lost time to the conflict, he probably picked up a couple of extra years of playing time thanks to the drain on talent the war caused. It allowed him to pad his already terrific career numbers. He finished with a .333 lifetime batting average, over 1000 bases on balls, and nearly 200 triples. In case there are any doubts, “Big Poison” is one of the all-time greats.

Over a 17-year career, Jimmy Rollins racked up an MVP and three All-Star game appearances. He also had 2455 hits and stole 470 bases. A Gold Glove shortstop, he has a shot at the Hall-of-Fame when he is eligible in 2021.

Fifteen years in the big leagues brought Magglio Ordonez over 2000 hits, almost 300 homers, and a batting average of .309. Pretty terrific numbers no matter how you slice them. Let’s see how this six-time All-Star does in the tournament.

The first baseman on Connie Mack’s “$100,000 Infield,” Stuffy McInnis banged out 2405 hits, most of them singles! But with his controlled swing and good “eye,” he only struck out 251 times in his career.

Turkey Mike Donlin is one of my favorite players. I had his card in an early strat-o-matic league I was in and was intrigued by his career. He was among the best hitters in baseball as evidenced by his .333 lifetime average, but was also enamored with the stage. A potential slot in the Hall-of-Fame was derailed by the fact that he kept quitting baseball to star in various vaudeville performances.

An early home run hitter, Buck Freeman hit round-trippers around the turn of the 20th-century when nobody else did. He’s in the tournament because of his career total of 131 triples.

Gary Pettis made the tournament based on his 354 lifetime stolen bases. He played in the majors for 11 years.

The owner of an elegant handlebar mustache, Ed Swartwood only played 8 full seasons, mostly in the American Association. In that time he hit an even .300.

Sorry… I had a data problem with this season, so not too many details. Mike Donlin snuck past Hall of Famer, Paul Waner and will be joined by Ed Swartwood and Buck Freeman in Round 3. The others will get a shot in Round 2.

A couple of highlights I managed to scratch out: One Paul Waner had 7 RBI in a 16 – 1 drubbing of Stuffy McInnis. No-hitters were thrown by two different Tom Seavers and two different Roger Clemens.