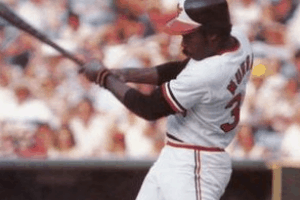 Hall-of-Famers Eddie Murray, Willie Keeler, and Elmer Flick lead the way as Round One continues. They will face Tigers Norm Cash and Ron LeFlore along with Chuck Knoblauch, Gary Matthews, and Giancarlo Stanton.

One of only six players to have 3000 hits and 500 home runs, Eddie Murray is arguably the greatest switch hitter in baseball history. Consistent at a very high level, “Steady Eddie” played in over 3000 games in his 21-year major league career. He also holds the career record with 128 sacrifice flies!

Wee Willie Keeler is one of the players who most exemplifies dead-ball era baseball. A prototypical singles hitter – 2513 of his 2932 career hits were singles – opposing outfielders played so close that there was almost no place to hit safely. Still he managed to “Hit ’em where they ain’t” for a .341 lifetime batting average, including the glorious 1887 season where he hit .424. Combined with his base-stealing ability, this Hall-of-Famer should be tough in the tournament.

Hall-of-Famer Elmer Flick managed a .313 batting over 13 big-league seasons around the turn of the 19th-century before an intestinal ailment derailed his career in 1907. For what its worth, that same year the Detroit Tigers offered Ty Cobb to the Cleveland team in a straight-up trade for Flick! Not a home run hitter, his power was in the form of triples – 164 of them.

Norm Cash cranked 377 home runs in his 17-year career, mostly with the Detroit Tigers. He also managed over 1000 base on balls. “Stormin’ Norman” is most well-known for his MVP-quality season in 1961, where he hit 41 homers and batted .361. He finished fourth in the voting that year because that also happened to be the year that Roger Maris hit his 61 HRs, passing Babe Ruth’s record.

Ron LeFlore‘s story is both amazing and tragic. Growing up in a poor neighborhood, he never played baseball and gravitated to crime. While serving a jail sentence, he started playing baseball for the prison team. Word made it’s way to Tiger manager, Billy Martin who arranged a furlough for him to try out. Upon his release on parole, he signed with the Tigers and became more or less an instant success. For nine years, he hit .288 and stole 455 bases and is the only player to lead the American and National Leagues in SBs. LeVar Burton played LeFlore in the movie, “One In A Million.”

Chuck Knoblauch displayed a nice mix of doubles, walks, and stolen bases over his twelve big-league seasons. His 407 career steals qualified him for the playoff.

Gary Matthews is another player that I have liked since my youth. Rookie of the Year in 1973, he was a steady hitter, good for a .281 average in his 16-year career. His 940 career walks slipped him into the tournament.

The currently active Giancarlo Stanton, though coming off an injury-plagued season, qualified by placing among the leaders in On-base Plus Slugging.

Elmer Flick and Wee Willie Keeler battled down to the wire to see who most wanted second place! Flick lost his last five games but Keeler returned the favor by dropping his last 3, getting swept by Chuck Knoblauch in the final series. This also benefitted Knoblauch by nailing down a tie for third place. Keeler led all teams in batting average with .269, Flick coming in a distant second at .234 while the league hit a meager .212. Flick’s extra-base hits made up for Keeler’s slight edge in steals. Top seed Eddie Murray finished last.

The top Keeler led the league with a .290 batting average and the Keeler team managed 21 hits in one game. There was only one no-hitter, by a Tom Seaver vs. Eddie Murray.

Flick and Keeler are joined by Gary Matthews and Chuck Knoblauch in Round 3. The others head to Round 2 to try their luck.