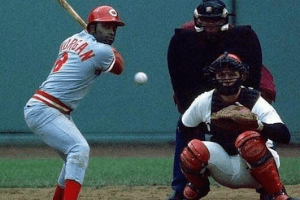 Joe Morgan, Gary Carter, and Roy Campanella are our Hall-of-Famers in Season 55. They are joined by Yankee greats Bernie Williams and Tino Martinez as well as Johnny Hodapp, Sal Bando, and Bill Joyce as Round One continues.

Joe Morgan swung a mighty bat and could field a ground ball with the best of them. He is our top seed in this season with career totals that are hard to argue with. In his 22 big league seasons, “Little Joe” rapped out more than 2500 hits with plenty of extra-base hits thrown in. His .271 batting average ballooned to a terrific .392 OBP thanks to his 1865 walks (good for fifth all-time). A 10-time All-Star, he was a five-time Gold Glove second baseman for The Big Red Machine, winning the National League MVP Award in 1975 and 1976. He was elected to the Hall-of-Fame on his first try in 1990.

Retiring at age 37 when he still had a few good years left in him, Bernie Williams avoided the decline phase of his career. As it was, he put in sixteen productive years with the New York Yankees, hitting a solid .297. With a good number of extra-base hits and a bevy of walks, he left behind an On-base Plus Slugging of .858. A five-time All-Star and four-time Gold Glover, while he isn’t in the Hall-of-Fame (Yet!), he has had his number retired by the Yankees and even has a plaque at Yankee Stadium.

As evidenced by his three Gold Gloves, Gary Carter was a fine defensive catcher. He was also pretty good with the stick, batting .262 lifetime with enough walks to boost his on-base percentage to a respectable .335. He was also pretty durable, seeing action in 2296 games in his nineteen seasons, which allowed him to accumulate over 2000 hits, 1000 runs scored, and 1000 runs driven in. He had some pop, too, hitting 324 career home runs. He was named an All-Star an impressive eleven times and was elected to the Hall-of-Fame in 2003.

A total of 339 home runs, 1271 RBIs and a qualified Tino Martinez for the playoff. He was dependable and consistently good for a long time: In his sixteen seasons, he hit .271 and was named to a pair of All-Star teams.

For nine big league seasons, mostly with the Cleveland Indians, Johnny Hodapp was a solid performer, stroking the ball to the tune of .311. He wrapped up his career at the age of 28 after a final year in the minors and headed back home to Cincinnati to join his family business as a mortician.

Sal Bando was the team captain of the Swingin’ A’s of the 1970s. Overshadowed by Reggie Jackson on Oakland Athletics and by Brooks Robinson when it came to defense at the hot corner, he nonetheless was a player to be reckoned with. In his sixteen seasons with the A’s (both in Kansas City and Oakland) and the Milwaukee Brewers, Bando smashed 242 homers and drew over 1000 walks, boosting his career .252 batting average to a .352 OBP.

“Scrappy” Bill Joyce only played eight big league seasons – he sat out the 1893 season because he didn’t want to play in for the Senators in Washington. When he wasn’t “kicking” about what he thought were poor decisions by umpires, he managed to hit the ball pretty well. His career batting average of .293 was supplemented by walks to a fine .435 OBP. He also hit 106 triples, including a record 4 in one game!

In a career shortened on the front end because his skin was the “wrong color” and on the back end due to an automobile accident, Roy Campanella still managed to put together a Hall-of-Fame career in only ten seasons. The second African American to play in the National League, Roy hit 242 home runs with a .272 average while holding down the catcher’s slot for the Brooklyn Dodgers, winning three MVPs. He’s in the tournament based on his spectacular .860 On-base Plus Slugging. I wonder what he would have done with the 250-foot leftfield foul line at the Los Angeles Coliseum.

He may have only played 8 years before the turn of the century, but Bill Joyce finished well ahead of the pack. Johnny Hodapp led in average with .215, as the league only managed .193 and .244 was enough to take the individual batting title. As might be expected, 8 starting pitchers achieved ERAs under 2.00.

Round 3 will see Joyce joined by Bernie Williams, Joe Morgan, Sal Bando, and Roy Campanella, who qualified for having a positive run differential. The others are on their way to Round 2.