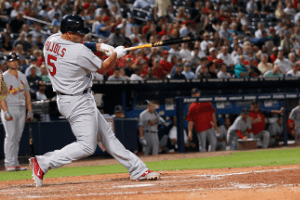 Surefire first-ballot Hall-of-Famer Albert Pujols has shown himself to be one of the games truly great hitters. A .300 lifetime average, well over 3,000 hits, and closing in on 700 homers show him a formidable threat in this tournament.

Ivan Rodriguez put up some spectacular number on his way to a Hall-of-Fame career. A lifetime .296 batting average with 311 HRs made him a fearsome competitor to opposing pitchers. Along the way, “Pudge” was a fourteen-time All-Star and picked up thirteen Gold Gloves.

George Burns was a solid dead-ball era hitter, primarily for John McGraw’s New York Giants. He had over 2,000 career hits and his 108 three-baggers were his ticket into the tournament.

Colorful sayings and malapropisms aside, Yogi Berra was a heckuva hitter as his 358 lifetime home runs will attest. He won three MVP awards and was a nineteen-time All-Star.

Most famous as the first baseman Lou Gehrig replaced as he began his 2,180 consecutive game streak, Wally Pipp was a pretty tough hitter in his own right. He’s in the tournament based on his 148 lifetime triples.

One of my favorite baseball memories is of Frank Howard. He was 6-7, 255 lbs and his playing days long behind him, he was the first base coach for the Milwaukee Brewers in a game at the old Cleveland Municipal Stadium. My step-father and I had pretty good seats behind first base (easy to do back then) and he yelled out, “Hey Frank, turn sideways… we can’t see the infield.” Crowds being what they were back then, Howard heard him and he turned and smiled back at us. 382 lifetime homers and for 1968-70, he was maybe the most feared right-handed hitter in baseball.

In a sixteen-year career, third baseman Vinny Castilla cranked out 320 home runs, qualifying him for the tourney.

Chase Utley made the tournament base on placing amongst the leaders in Win Probability Added, one of the metrics developed to measure player value. We’ll see how he does.

Current superstar and future Hall-of-Famer, Albert Pujols took this one, leading in batting and runs scored to out-pace the field.

Although he only hit .195 and stole a total of 9 bases (against 13 caught stealing!), Frank Howard still managed a .500 record and will be moving forward in the tournament.

In one game, a Wally Pipp had 4 hits, including 3 HRs… take that Lou Gehrig! There were 4 no-hitters, including two by different Tom Seavers against Vinny Castilla.

Pujols and Howard are joined by Chase Utley and Yogi Berra in Round 3. The others will have a second chance to move ahead in Round 2.

So, it seems that there are TWO George Burns who played major league ball (neither one is the comedian)! One made his big-league debut with the New York Giants in 1911 and retired in 1925 with 108 triples, which by itself qualified him for the tournament. The other joined Detroit in 1914 and played until 1929, hitting .307 lifetime and winning the AL MVP with Cleveland in 1926, so he qualified, too! I conflated the two which explains the disproportionately high seed position for the round. The George Burns who finished 5th in this season is the first one I described. I will add an additional season at the end of this round for the other and fill it with some hitters I like… I don’t expect them to last but we’ll see how they do. In the end, we are only going to have one winner anyway!