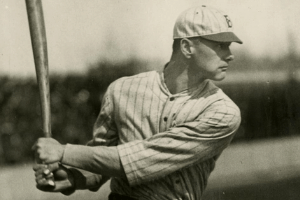 As we head toward the end of Round One, Hall of Famer Zack Wheat is the top seed in a decidedly “Old-Time” Season 64. He will be facing 19th Century ballplayers Mike Tiernan, Herman Long, Denny Lyons, Monte Cross, and Jack Glasscock as well as Willie McGee and Twins great, Tony Oliva.

Zack Wheat played nineteen seasons, the first eighteen for Brooklyn’s National League franchise known first as the Superbas, then Dodgers, then Superbas again, before settling on the Robins in honor of manager Wilbert Robinson. During those years, Wheat stroked the ball for a .317 average, picking up 2884 hits, including 476 doubles, 172 triples, and 132 dead-ball home runs. He both scored and drove in over 1200 runs and was elected to the Hall of Fame by the Veteran’s Committee in 1959.

Manning rightfield for his entire thirteen-year career for the New York Giants, Mike Tiernan hit .311 from 1887-99. He 162 triples and twice led the National League in home runs. Silent Mike was also willing to take a walk, giving him a .392 OBP and a healthy .855 OPS with plenty of stolen bases which were more easily earned during much of his career.

Herman Long‘s sixteen-year career was marked by his 1456 runs scored and 537 stolen bases. It is also remarkable in that he was widely considered to be the best fielding shortstop in baseball during the 1890s and also holds the record for most errors committed in a career with over 1000! Apparently, his range was something to behold and he got to balls that no one else would. He hit .277 lifetime.

A lifetime .295 hitter, Willie McGee was a four-time All-Star, three-time Gold Glove winner, a two-time batting champ, and won the National League MVP award in 1985. He qualified for the tournament based on his 448 stolen bases and 2254 base hits over the course of his eighteen-year career.

A real stud at third base for the American Association Philadelphia Athletics back in the 1880s, Denny Lyons transitioned to the National League for the 1890s, playing for the New York Giants, Pittsburgh Pirates, and St Louis Browns. In his thirteen seasons, he hit .310, qualifying him for the tournament.

Playing shortstop next to Lyons on the 1894 Pittsburgh Pirates was Monte Cross. Described as good glove / no stick, Cross nevertheless played for fifteen seasons in the big leagues and several more in the minors. He qualified for the tournament based on his 328 stolen bases but only managed a .234 lifetime batting average. He did, however, have a pretty noteworthy mustache!

Another 19th-Century shortstop and another spectacular mustache! Jack Glasscock, like Herman Long, is rated as the best fielder at that position by many researchers. The fact that Long was often compared to Glasscock tells what a high regard “Pebbly Jack” was held. He could hit, too, batting .290 over his seventeen big-league seasons. He too qualified for the tournament based on his rule-supplemented 372 stolen bases.

Eventually, someone at SABR will invent a superior statistical analysis tool to compare players across eras. When that happens, Tony Oliva will be seen as the Hall-of-Fame-level player he was. In his fifteen-year, injury-plagued career spanning the 1960s and 79s, Tony hit .304 with 220 home runs. An eight-time All-Star with a Gold Glove to his credit, he won three batting titles and led the American League in hits five times. He qualified for the tournament based on his offensive winning percentage, but I would have selected him anyway.

19th Century star, Mike Tiernan surprised with 101 victories and a first-place finish batting .232 as a team. The Tony Oliva team led in batting with .237 while the league hit .212.

Tiernan and Oliva are joined by Denny Lyons and Zack Wheat in Round 3. The others head to Round 2.