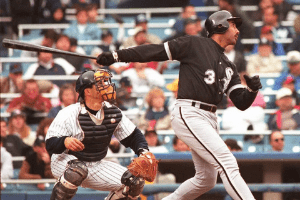 A controversial pick for the Hall-of-Fame for some, Harold Baines put together an enviable career in his 22 big league seasons. The statistics are what you might expect from a batter who was consistently good for such a long time: 2830 games played, 2866 base hits, including 488 doubles and 384 home runs. He also scored 1299 runs and drove in an additional 1628. His lifetime .289 batting average included eight seasons over .300. A six-time All-Star, Baines had three stints with the Baltimore Orioles and another three with the Chicago Whitesox. To help understand what a high regard Baines was held by those who saw him play, the Whitesox retired his number after they traded him to the Texas Rangers WHILE HE WAS STILL ACTIVE! They un-retired it upon his return to the team and while he was a coach with the team. He was selected by the Veteran’s Committee in 2019.

Arguably the greatest fielding third baseman of all time, Brooks Robinson was a fixture at the hot corner in Baltimore for most of 23 seasons. Robinson won the MVP in 1964 for the Orioles, was an eighteen-time All-Star, and won a record (since surpassed by pitcher Greg Maddox) 16 Gold Gloves. His hitting statistics are also pretty solid, rapping out 2848 hits, 482 of them for doubles and 268 for homers. His .267 batting average may make it difficult for him to do well in the playoff. He was elected to the Hall of Fame in 1983.

Nineteen seasons, mostly with the Seattle Mariners, allowed Raul Ibanez the time to rap out over 2000 hits with over 400 doubles and 305 home runs. A lifetime .272 hitter, he drove in 1207 runs and scored 1055 himself.

Ginger Beaumont‘s .311 batting average qualified him for the tournament but there is more to his legacy. He picked up the batting title in 1902 and led the league in hits on four occasions. He also stole 252 bases in his twelve seasons.

A .304 hitter for his twelve seasons which really amounted to 1921 through 1930, Curt Walker also hit 117 triples. He quit the Cincinnati Reds after a fine season to take a $7500 bonus to play in the minor leagues. Things were different then.

Few hitters can effectively combine average, on-base percentage, and slugging in the way Ryan Klesko did during his sixteen-year career. Splitting time between leftfield and first base, Klesko drove 282 home runs and 342 doubles to supplement his .272 batting average with a .500 slugging percentage. His .870 OPS qualified him for the playoff.

A tight race between the top three finishers ended in a surprise with Curt Walker on top. Ginger Beaumont led the league in team batting average with .229 vs. the league’s .204.

There was not much excitement to report, although:

Walker and Beaumont are joined by Ryan Klesko and Mike Mitchell in Round 3. The others head to Round 2.