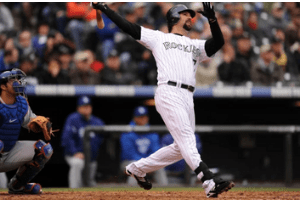 Todd Helton made the most of his seventeen years in the hitter-friendly Coors Field, batting .316 with 369 homers and almost 600 doubles. He also knew how to take a walk, collecting 1335 bases on balls, boosting his OBP to .414. Combining this with his .539 slugging percentage gives him an OPS of .953, good for 18th on the all-time list. A five-time All-Star with three Gold Gloves, Helton bears watching in the playoff.

Ichiro Suzuki began his professional baseball career as an eighteen-year-old with the Orix BlueWave of Nippon Professional Baseball in Japan. After setting numerous batting records over his years there, he eventually made his way to the Seattle Mariners as a 27-year-old rookie in 2001. He promptly made a splash, garnering 242 hits for a .350 batting average, being selected for the All-Star Team, and winning every award in sight: Rookie of the Year, Most Valuable Player, Gold Glove, and Silver Slugger. What followed was nine more consecutive All-Star Game appearances, the single-season hit record (262), enough hits to get him past 3000, a .311 batting average, and a total of 509 stolen bases over the course of his nineteen years in the Major Leagues. A spot in Cooperstown will come his way as soon as he is eligible.

A star before the turn of the 20th century, Mike Griffin was fast and great on the basepaths. He stole 473 bases and scored over 100 runs ten times in his 12-year career. He also smacked a not-too-shabby 314 doubles while batting .296 before his career-ending contract dispute.

Cupid Childs batted .306 in his 13-year major league career, mostly playing second base with the old Cleveland Spiders of the National League. Childs’ lifetime on-base percentage is .416, higher than every second baseman in the Hall of Fame except Rogers Hornsby and Eddie Collins.

With a .317 lifetime batting average, “Wild Bill” Everitt made the most of his brief, seven-year big league career.

Hardy Richardson made the playoff by virtue of his 126 triples but he also managed to hit .299 in his fourteen years centered on the 1880s.

346 lifetime steals got Paul Radford into the tournament. Playing for nine different teams over his twelve-year career, his batting average was a lackluster .242 but his OBP was .351.

As I have mentioned, the tournament draws from statistics generated through the 2015 season. Josh Donaldson benefits from that because 2015 was his MVP season. He qualified based on his OPS average, which currently stands at .878 – not too shabby.

The top Suzuki batted .282 and a Roger Clemens no-hit Josh Donaldson. Other than that, there were no noteworthy achievements.

Richardson and Suzuki are joined by Bill Everitt, Cupid Childs, Todd Helton, and Mike Griffin in Round 3. Helton and Griffin both had positive run differentials which qualifies them to move forward. Donaldson and Radford head to the Round 2 consolation bracket.