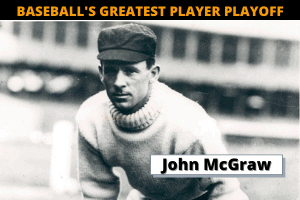 Hall of Famers John McGraw, Hugh Duffy, and Bobby Doerr will be challenged by a few guys who may be joining them in Miguel Cabrera, Carlos Beltran, and Sammy Sosa. They will also have to contend with
Tip O’Neill and Stuffy McInnis. As you may have heard, the top four finishers automatically advance to Round 5.

John McGraw proved his 104 wins in Round 1 (competing with Babe Ruth!) was no fluke, outlasting Miguel Cabrera who came in second by a single game. The fight for the last two qualifying slots was fierce but back from the second chance Round 2, Bobby Doerr won his last 10 in a row, including the final series against Sammy Sosa, to tie with Tip O’Neill for 3rd. Sosa just missed a .500 record and an automatic trip to Round 5. He will join Duffy, Beltran, and McInnis in Round 4.