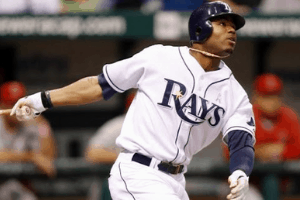 Top see Carl Crawford has his work cut out for him as his competition includes two Hall-of-Famers in Lloyd Waner and Tony Perez. He will also have to get by Dodger great Ron Cey, Bill North, Carlos Lee, Pat Burrell, and
Billy Shindle. Only the top 4 finishers are guaranteed a slot in Round Three.

Coming down to the last weekend of the season, the top three teams were all in it. In the end Ron Cey outlasted Carl Crawford and the surging Tony Perez to take the pennant. They will be joined in Round Three by Pat Burrell. Despite leading all teams in batting average by a healthy margin, Hall-of-Famer Lloyd Waner failed to qualify. For him, Bill North, Carlos Lee, and Billy Shindle, the road ends here.