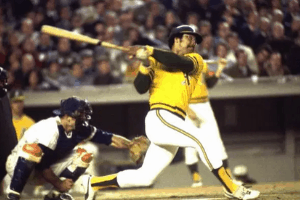 Before he became “Mr. October,” Reggie Jackson was already well on his way to a Hall-of-Fame career with the Athletics. All told, in his 21-years in the big leagues, he led in home runs four times, picked up an MVP, and was named to 14 All-Star teams. When he retired in 1987, his 563 career home runs were good for sixth place on the all-time list and he is among the leaders in multiple offensive categories.

Heinie Manush was one of the most dominating hitters of his era. His seventeen years spanned the 1920s and 30s, where he stroked 2524 hits with 491 doubles and 160 triples, good for a .330 lifetime batting average. He was selected for the Hall-of-Fame by the Veteran’s Committee in 1964.

An excellent fielder – he won six Gold Gloves – Buddy Bell was also no slouch at the plate. He had 2514 hits in his 18-year career, good for a .279 lifetime batting average. He also slugged 425 doubles and 201 homers.

Bob Johnson had a good eye, as evidenced by his 1075 bases on balls in thirteen big league seasons. He was also pretty fair with the stick, batting .296 with 288 home runs. His OBP of .393 and slugging average of .506 speak to his production. One wonders what he might have accomplished in his career if he had made the majors before becoming a 27-year-old rookie in 1933.

“Long John” Reilly only played for ten big league seasons – seven of them for the Cincinnati entry in the American Association from 1883-1889. He hit .289, primarily holding down first base due to his 6-3, 185 lbs frame. He made the playoff by virtue of his 139 triples.

Bill North stole 395 bases in his eleven major league seasons, mostly with the Oakland Athletics. While only hitting .261, his ability to take a walk boosted his OBP to a healthy .365, just what you want in a leadoff hitter.

Edwin Encarnacion‘s 414 lifetime home runs earned him a spot in the tournament. The hard-hitting first baseman also has a decent .352 lifetime OBP, which may make him someone to watch.

Often overshadowed by his extremely talented son, Ken Griffey put together a nineteen-year career that included a little power, a little speed, and good bat control. He slugged 152 home runs, stole 200 bases, and hit for a .296 average. He is in the tournament based on his ranking in Wins Probability Added.

19th Century first baseman, John Reilly, had a lucky year, going 42-24 in one-run games and that was enough to propel him to a first-place finish. Ken Griffey Sr. led in batting with .237 vs. the league’s .209.

Bob Johnson and Reggie Jackson were the homerun hitters with the top Johnson hitting 25 on the season. Bill North was no-hit by Cy Young.

Round 3 will see Reilly, Johnson, Griffey, and Heinie Manush being joined by Reggie Jackson, who won his last two games of the season to swing his run differential into the positive. The rest head to Round 2.