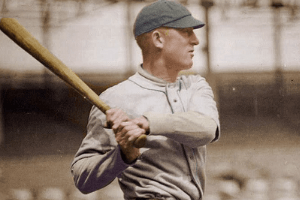 In eighteen full seasons, plus twelve more games over three years when he was mostly just a manager, Hall-of-Famer Fred Clarke chalked up significant lifetime statistics. He collected 2678 hits, 220 of them triples, for a .312 batting average, scored over 1600 runs, and stole 509 bases. He was selected for Cooperstown by the Veteran’s Committee in 1945.

Making it to the Brooklyn Superbas at the age of 26, Jake Daubert played until he was 40, logging fifteen seasons between the other various Brooklyn teams (Dodgers and Robins) and the Cincinnati Reds. He hit over .300 ten times, winning two batting titles and an MVP award. He retired with a .306 average, 165 triples, and 251 stolen bases. If he had made the big leagues a couple of years earlier and not died after his last season, he might have made it into the Hall-of-Fame.

A consistent performer for seventeen seasons, Ron Cey was a six-time All-Star at third base for the Los Angeles Dodgers. 316 home runs, 1139 RBIs and 1012 bases on balls qualified the “Penguin” for the tournament. All those walks boosted his .261 batting average to a respectable .354 OBP.

Harvey Hendrick didn’t get to play regularly until he was 29 years old but when given the chance, he performed. Over the next eight seasons – he played eleven in all – Hendrick hit over .290 in all but one, leaving him with a lifetime .308 batting average.

The first-ever batter for the Boston Redsox in the newly-major American League, Tommy Dowd finished his ten-year career roaming the outfield of the Huntington Avenue Baseball Grounds. He hit .271 lifetime and his 368 stolen bases qualified him for the playoff.

Danny Murphy squeaked into the playoff based on his 102 career triples, tying him 150th on the all-time leader board. He started his big-league career with two seasons with the National League’s New York Giants, played twelve with the Philadelphia Athletics in the American League, and wrapped up his career with the Federal League Brooklyn TipTops, batting .289 and stealing 189 bases.

Wally Berger played eleven seasons in the National League, primarily for the Boston Braves. His rookie year of 1930 was pretty spectacular seeing him hit a rookie-record 38 home runs (which stood in the National League until 2019) and accumulate a rookie-record 119 RBIs with a .310 batting average and .614 slugging percentage. 1930 was a pretty high-octane season overall, but he was still 3rd in homers and tied for eighth in RBI. Over the next eleven seasons, Berger compiled a .300 batting average, hit 242 home runs, drove in 898 RBI, and had a .522 slugging average. He qualified for the playoff based on his On-base Plus Slugging of .881. Not too shabby.

Okay… Don Buford did not qualify for the playoff. So why is he here? Because his player file is directly under Bill Buckner’s and I didn’t catch it until I had already created the “all Don Buford team” (no small task) and played the season. So, I figured, “What the hell!”

Buford split ten seasons between the Baltimore Orioles and Chicago White Sox between 1963 and 1972. He hit .264 with an on-base percentage almost 100 points higher. He also stole 200 bases and made the All-Star Team in 1971. We’ll see how he does!

HOFer Fred Clarke finished well ahead of the competition to qualify for Round 3. Jake Daubert finished fourth but led in team batting average with .250 vs. the league’s .212.

Clarke, Daubert, and Berger are joined by Danny Murphy in advancing. Harvey Hendrick also qualifies to move on due to his positive run differential. Stowaway Don Buford finished ahead of Hendrick in the standings so he may do better than expected. He gets a second chance along with Ron Cey and Tommy Dowd.

Another season of eight will have to be added to allow Buckner his shot. Which means even more “Tim’s Favorites ™” get to join Oscar Gamble and George Hendrick in the fun. We’ll see how they do.