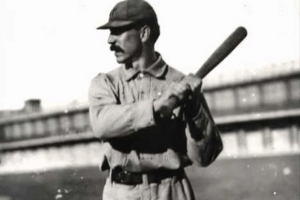 “Eagle Eye” Jake Beckley was selected for the Hall-of-Fame by the Veteran’s Committee in 1971. He retired from his major league playing career in 1907 and since he is our top seed this season, it begs the question: what took so long and why don’t we know about him? Look at his accomplishments: He retired as the all-time leader in triples with 244, his 2938 career hits were second to Cap Anson’s total, and his .308 average is nothing to sneeze at. He still holds the record for putouts by a first baseman, with over 23,000 in his 20 years in the big leagues. He may be a surprising dark horse in the tournament.

Known more for his glove than his bat, Ozzie Smith won thirteen Gold Gloves and was named to fifteen All-Star teams. In his nineteen years with the San Diego Padres and St. Louis Cardinals, “The Wizard of Oz” slapped 2460 hits and stroked a .262 batting average, stole 580 bases, and turned countless backflips. He’s was elected to the Hall-of-Fame in 2002 in his first year of eligibility.

Lloyd Waner might be in the Hall-of-Fame by accident – there is some speculation that the voters on the Veteran’s Committee confused him with his older brother, Paul. I think it more likely that he was hurt by the association – stuck playing in the shadow of his older brother. For a decade-and-a-half, “Big Poison” Paul and “Little Poison” Lloyd were a potent combination for the Pittsburgh Pirates. Lloyd managed 2459 hits, 118 triples, and a .316 lifetime batting average. Those look like Hall-of-Fame numbers to me.

Matt Williams hit 378 home runs and drove in 1218 in his 17-year career split between the San Francisco Giants and Arizona Diamondbacks (with a one-year stop off in Cleveland). He was a five-time all-star and picked up 4 Gold Gloves along the way.

Another Veteran’s Committee selection, Hall-of-Famer Chick Hafey batted .317 in a somewhat injury-plagued career. From 1927-1932, Hafey hit .339 with a .596 slugging average, which is a pretty good peak.

Frank “Wildfire” Schulte made the tournament based on his 124 lifetime triples accumulated over the course of his 15-year career. He won the Chalmers Award in 1911, which was given to the most valuable player.

A solid fielding second baseman and eventually the best utility man in the game, Dots Miller qualified for the playoff based on his 104 career triples. He hit .263 lifetime.

A .287 lifetime hitter with 282 career home runs, Ken Boyer made the tournament based on his lifetime WAR (Wins Against Replacement), one of those new-fangled metrics all the kids are using these days. Regardless, he was very good for 15 years and displayed way better than average power. I am curious as to how he will fare.

As the season was wrapping up, with two games to play and only one game back, Chick Hafey won them both. Unfortunately for him, so did first place Jake Beckley, who ended up taking the season. Beckley (.2326) virtually tied Lloyd Waner (.2333) for the team batting lead but did so with many more extra-base hits, which explains the difference in their records. Beckley led the league in slugging with .355. Waner came in at .279.

Beckley, Hafey, and Boyer are joined by Wildfire Schulte in Round 3. The rest are off to try their luck in the Round 2 second chance.