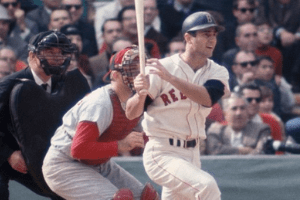 Carl Yastrzemski had a long and illustrious career with the Boston Redsox. For 23 years he patrolled left field, played first base, and DHed at Fenway Park while terrorizing the pitchers of the American League. A complete ballplayer, Yaz was an eighteen-time All-Star, seven-time Gold Glove winner, and peaked with a Triple Crown and MVP in 1967. All told, he managed 3,419 hits, 452 home runs, and a .285 batting average in a Hall-of-Fame career. I always liked him as a ballplayer and I hope he does well.

This solid-fielding shortstop was a six-time All-Star and picked up the AL MVP in 2002. Miguel Tejada finished his sixteen-year career with 307 homers, over 2400 hits, and a .285 batting average. I think the Hall-of-Fame committee might have missed this one.

Clyde Milan played centerfield for sixteen years with the Washington Senators from 1907-1922. During that time he compiled 485 stolen bases, scored over 1,000 runs and hit .285.

Riggs Stephenson played second base or the Cleveland Indians and leftfield for the Chicago Cubs (where they could hide his fielding… inadequacies) during the 20s ad 30s. Say what you want about his glovework, the guy could flat get on base: lifetime .336 batting average and OBP of .407. And that’s what this tournament is all about.

Cecil Fielder came back to the major leagues after a one-year stint in Japan and he came back in 1990 as the premier power hitter in baseball, becoming the first American Leaguer to hit 50 home runs since Roger Maris’ 61 in 1961. Lifetime, he managed 319 round-trippers.

Danny Tartabull spent 14 years in the majors and qualified for the tournament based on his ranking in On-base Plus Slugging (OPB).

Speedster Clyde Milan outdistanced the competition to take the S21 season. His various iterations took the top 9 slots in the stolen base category – in fact, stealing over half of the bases in the season – and leading the league in hitting with .228.

A Roger Clemens tossed a no-hitter against Miguel Tejeda and a different Clemens struck out 17 Ryan Howards in 8 innings (Howard won the game 4 – 2).

Milan is joined by Dave Parker, Riggs Stephenson, Carl Yastrzemski, and Danny Tartabull – fifth place finish but a .500 record, so he qualifies – in Round 3. The others will have a second chance to move ahead in Round 2.