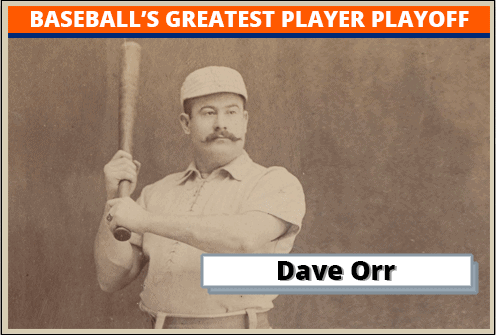 The 19th-century’s unknown slugger, Dave Orr has the top seed in this season but he has his work cut out for him. Hall-of-Famer Hack Wilson is the marquee player and is joined by Buck Freeman, Charlie Grimm, Jimmy Williams, and contemporary stars Thurman Munson, Mickey Tettleton, and Davey Lopes.

Played as: Buck Freeman
Full Name: John Frank Freeman
Nicknames: None but he was so popular that almost every player with the last name “Freeman” invariably got “Buck” as a nickname!

While Dave Orr had a commanding team batting average, Hack Wilson’s home runs were too much to overcome. Wilson easily took first place, 14 games ahead of second place Buck Freeman and 16 ahead of Orr. Jimmy Williams had a chance to tie Davey Lopes for fourth place but lost on the last day of the season. He joins Grimm, Tettleton, and Munson in Round 4.