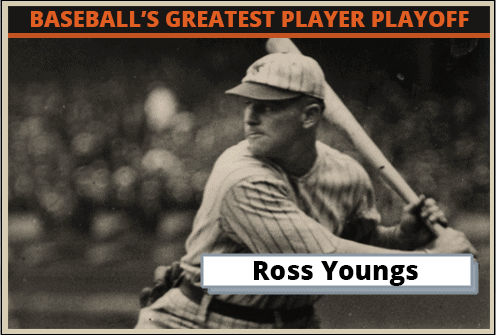 Questionable Hall-of-Famer Ross Youngs, whose career was cut short by Bright’s Disease, is our top seed. He is joined by fellow New York Giant Sam Mertes and a trio of Cincinnati Reds: Ken Griffey Sr, Pat Duncan, and Tommy Harper, as well as Denny Lyons, Taffy Wright, and Bill Buckner.

Played as: Pat Duncan
Full Name: Louis Baird Duncan
Nicknames: He was Irish and it was the 19-teens, so he got “Pat.” It could have just as easily been “Paddy” or “Mick.”

As if in response to the Hall-of-Fame question, Ross Youngs delivered, finishing a healthy 10 games ahead of second place Denny Lyons. Mertes and Wright join them in Round 5 while Griffey, Harper, Duncan, and Buckner try their luck in the Round 4 second chance/elimination round.