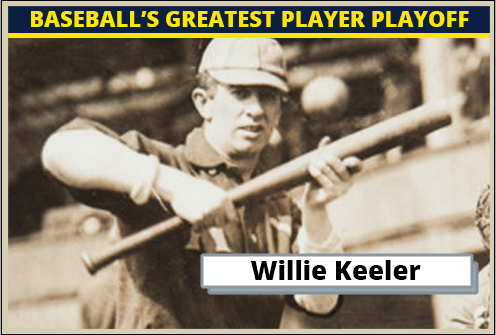 Elimination is on the brain as three “Willies” try to keep their hopes alive. Hall of Famer Wee Willie Keeler, Willie Davis, and Willie Horton square off against HOF-er Pee Wee Reese, 19th-century standout Fred Dunlap, Harvey Hendrick, Mark Grace, and the shady Heinie Zimmerman. Only a top 4 finish guarantees an advance to Round 5.

Wee Willie Keeler hit enough of them where they weren’t to charge ahead of the faltering Willie Davis to take the pennant. Mark Grace parlayed his .300 team batting average and more than a few doubles to claim third place. Pee Wee Reese and Fred Dunlap each won their final games to stay tied for fourth and claim their spots in Round 5. Zimmerman, Hendrick, and Horton have completed their journey.