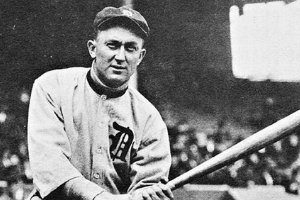 Round One, season one of Baseball’s Greatest Player Playoff features Ty Cobb and seven more great (and almost great) players against one another in a 154-game season. Who moves ahead? Check it out!

Ty Cobb won this in a walk, never losing more than 9 in any one month. Cobb also managed an 18-game winning streak and never lost more than 3 in a row. Cobb’s main strength was stealing bases: Every starter stole over 100 bases with the top Cobb stealing 169. As a team, they stole 1244.

As an indication as to how tough the pitching was, Cobb’s team batting average was .287 and the entire league only batted at the Mendoza Line – .210. The top Cobb led the league with a .312 average and only one other Cobb regular topped .300.

On the season there were 5 no-hitters, including a perfect game by Roger Clemens against Willie Davis.

Cobb, Bobby Veach, Gene Tenace, and Willie Davis move on to Round 3. The others get a second chance in Round 2.