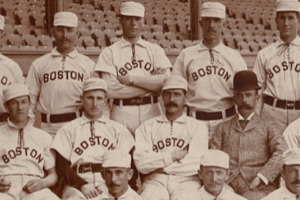 In our penultimate season, for only the second time, we have a season without a Hall-of-Famer. Top seed Patsy Donovan goes up against George Burns, J.D. Martinez, Fred Dunlap, Bake McBride, Pepper Martin, Luke Easter, and Manny Mota.

In what was really fifteen seasons plus 22 at-bats scattered over two years as a manager, Patsy Donovan was the consummate singles hitter, batting .301 for eight teams in the National League and American Association. Of his 2256 hits, 1957 were singles, leaving him with a lifetime slugging percentage of .355. But he could steal bases, totaling 518 in his career. He also scored 1321 runs which earned him the top seed in this season.

George H. Burns stroked the ball for a .307 batting average, garnering 2018 hits, and 444 doubles in his sixteen-year career. The winner of the MVP in 1926 (previous winners were ineligible, so, sorry Babe Ruth), Burns hit over .350 three times. HE thought he should have been in the Hall-of-Fame.

Making a last-minute qualification based on his OPS+, J.D. Martinez is at somewhat of a disadvantage. He qualified based on his current career numbers but is competing with only his first five years of statistics. A solid home run hitter who is carrying a lifetime .294 average, we will have to see how he performs with the all-time greats.

The highest-paid player in baseball in the 1880s, Fred Dunlap was an ambidextrous second baseman who was also the best fielder despite never using a glove. A lifetime .292 hitter, Dunlap was a last-minute qualifier for the tournament based on his OPS+.

Let me be clear, Bake McBride is here on my personal invitation. The 1974 Rookie of the Year, he became a star just when I was falling head-over-heels in love with baseball and he was one of my favorite players. A .299 lifetime hitter, McBride could hit and was fast. He stole 183 bases and would have had a bunch more and played for much longer than his eleven seasons if he had not suffered so many injuries.

Well regarded as a member of the St. Louis Cardinals Gashouse Gang of the 1930s, Pepper Martin‘s aggressive baserunning made him a fan favorite and also contributed to his injury-shortened career. Playing in thirteen big-league seasons from 1928-1944, Martin hit .298 and led the league in stolen bases three times and was a four-time All-Star.

One of the truly great home run hitters in the history of the game, Luke Easter was famous for the tape measure homers he hit in major and minor league ballparks. Unfortunately for all baseball fans, he was already 33 years old before the racial barriers had fallen far enough for him to make it to the Cleveland Indians. He only got a few years in the big leagues, but his 162-game average reads 31 home runs, 112 RBI, and a .274 batting average. Can you imagine what he might have accomplished if he had come up at 23?

Another invitee to the playoff, Manny Mota retired with a record 150 career pinch hits and a .304 batting average. I always like him and felt like he deserved a shot against the guys who got to play every day.

It came down to the last week of the season and J.D. Martinez found himself in first place with a relatively low total of 83 victories. The Patsy Donovan team led in batting average with .267 while the league hit .249.