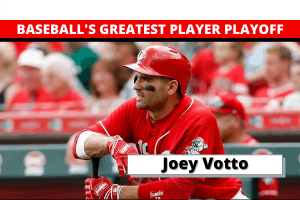 Joey Votto looks to see if he can maintain his membership in the Century Club as he takes the top seed in this season that features three Hall-of-Famers in the person of Sam Rice, Pee Wee Reese, and Ernie Lombardi. Also in the mix are old-timers Sam Wise and Baby Doll Jacobson and a couple of old Cleveland teammates in Rico Carty and George Hendrick. It’s going to take a top-four finish to automatically move on to Round 5.

Joey Votto showed his 101 Round 1 wins were no fluke, matching that total here in Round 3. He easily out-distanced second place Lombardi with Jacobson and Rice also qualifying for Round 5. The others head for a second chance in Round 4.