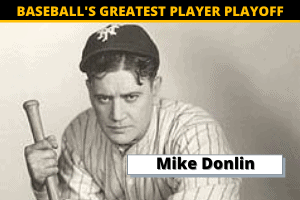 Turkey Mike Donlin has his work cut out for him. How will he contend with the speed of Hall-of-Famers Wee Willie Keeler and Lou Brock? How about the power of Matt Williams and Lance Berkman? Plus there are the old-timers, Heinie Zimmerman, Mike Smith, and Tommy Leach. Only 154 games will tell the tale and only a top-four finish guarantees a trip to Round 5.

It was the final day of the season. Mike Donlin had secured first place by a wide margin and Lance Berkman by virtue of his home runs and Lou Brock by his stolen base had locked up second and third. Wee Willie Keeler faced Mike Smith needing a win to tie Smith for fourth place and gain a berth in Round 5. Alas, it was not to be as Smith came out ahead 3-2. Zimmerman, Leach, and Williams head to Round 4 for a last-ditch effort to move ahead in the tournament.