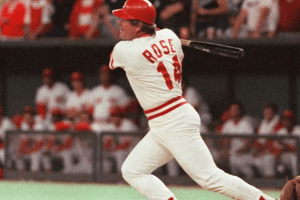 Let’s be clear: Pete Rose was a very good hitter. In a 24-year career, “Charlie Hustle” hit for a .303 batting average. Over the course of those 24 years, he played more games than anybody, had more at-bats than anybody, and, of course, had more hits than anybody. He won Rookie of the Year, an MVP, and was a 17-time All-Star. He is an All-Time Great.

Jeff Kent had a long career with solid production for several major league teams which allowed him to accumulate 377 home runs and over 1500 RBI. JAWS has him ranked as the 20th best second baseman of all-time. He may yet make it into the Hall-of-Fame.

Mark McGwire made a splash on the scene as a rookie, smacking 49 home runs. If it wasn’t for injuries, who knows how many more “Big Mac” would have hit than the 586 he managed. He will probably be in the Hall someday.

Impacted by three years of military service during World War II, Pee Wee Reese still managed a Hall-of-Fame career. Mostly known for his stellar defense, he made the tournament thanks to his 1210 career walks.

The original Louisville Slugger, Pete Browning had a tumultuous thirteen-year career, mostly in the 1880s where he hit .341 and stole at least 250 bases.

I was thrilled that Toby Harrah made the tournament… truth be told, I almost assuredly would have given him an invite anyway. He played third base for Cleveland during my high school years and I was quite a fan. I went to a Tribe game with a friend who happened to be the president of his fan club. He hit two homers that game and we got to meet him afterward. My impression was that he was quite a nice guy.

Ron Gant was a two-time All-Star who managed to hit 321 home runs in a sixteen-year career, much of it with the Atlanta Braves.

Charlie Hickman was a dead-ball era player who got into the tournament based on placing in the Offensive Winning Percentage category. Contemporaries said that if he had played when Babe Ruth did, he would have been a home run hitter too. He probably should have been entered just on his nickname: Piano Legs! Let’s see how he does!

The original “Louisville Slugger” took the title in this one and only a rough June, where he went 13-17, kept Pete Browning from reaching 100 wins. He led the league with a .270 average, versus a league average of .209, and Mark McGwire’s 200 homer advantage wasn’t enough to make up the difference.

One McGwire had a 3-HR game and another picked up 23 RBI in five games; considering that that same McGwire only had 64 RBI on the year and had a .180 average, the rest of his games must have been rather quiet. One Charlie Hickman managed 14 triples while the rest of the team averaged 4.

Browning and McGwire are joined by Pete Rose and Pee Wee Reese in Round 3. I was sad to see hero of my young adulthood, Toby Harrah, miss the cut but he, Kent, Hickman, and Gant have another shot in Round 2.