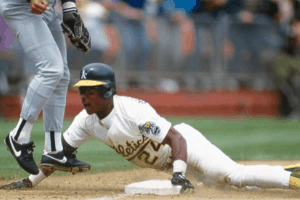 Although George Kell led the league in batting with .247, as I surmised would happen, Rickey Henderson more than made up the difference with walks and stolen bases. The league as a whole only batted .201, with five of the eight teams on the interstate.

The George Kells had a 20-hit game in which they shutout the Jermain Dyes 13 – 0 and three different Rickey Hendersons had 6-SB games. Two Rickey Hendersons and one Juan Pierre managed over 130 SBs on the season. There were no no-hitters but one Walter Johnson threw 11 no-hit innings until he made way for Sandy Koufax, who was tagged with the loss in the 13th.

Henderson, Kell, and Pierre are joined by Bill Lange (who?) in Round 3. The others get a second chance in Round 2.

The Hitters Hall of Famers Harry Hooper, Alan Trammell, and Gary Carter don't have a sure-fire ticket to Round 5. Also hoping to grab one of the coveted slots are Alex Rodriguez, Gus Suhr,...

Continue Reading
link to Round 4 S17

The Hitters A mix of eras, teams, and hitting styles along with a couple of Hall-of-Famers to boot. HOF-ers Max Carey and Johnny Evers lead the charge to forestall elimination against...