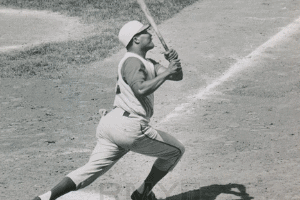 Top seed Vada Pinson is the top seed in the season featuring many modern players (and by modern, I mean guys I saw play!) such as Paul Konerko, Bob Watson, Tim Salmon, Willie Horton, Dick Bartell, Adam Dunn, and Marquis Grissom. You know the drill: top 4 or a .500 record to advance.

Bob Watson came on strong the last month of the season but it was not enough to catch the notoriously underrated Vada Pinson. Power hitters Adam Dunn and Willie Horton round out the top four with Paul Konerko also qualifying due to his plus-.500 record. Sadly, we bid a fond farewell to Tim Salman, Dick Bartel, and Marquis Grissom.