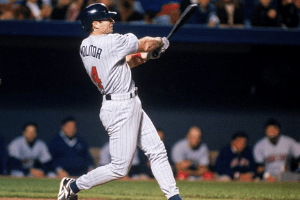 Paul Molitor had a 21-year career that saw him bat .306 and appear in 7 all-star games. His long career gave him time to amass impressive numbers, including 3,319 hits and 504 stolen bases. With a large part of two seasons lost to injuries, he might have put up some even more impressive totals.

Another stellar second baseman, Nellie Fox spent 19 years in the bigs, mostly with the White Sox. A solid hitter who could take a walk, he also picked up an MVP along the way.

When rating the catchers, for my money it has to be Johnny Bench at the top of the heap. He reinvented catcher defense and was a constant threat at the plate. In a career that blossomed during the pitching-rich 1970s, he managed to hit 389 homers and picked up a Rookie of the Year Award as well as two MVPs.

I had to look up Jack Doyle. He had a 17-year career with a .299 batting average and 518 stolen bases compiled mostly during the 1890s as he bounced around 10 different teams.

Max Bishop was a solid defensive second baseman who could walk as well as anyone – well, anyone who wasn’t named Ted Williams. He retired with a .423 lifetime on-base percentage.

One of my favorite players was Mike Hargrove. He was the original “human rain delay” but boy could he hit! He could take a walk, too, garnering a .396 lifetime on-base percentage.

I included Bob Watson in the tournament because he scored Major League Baseball’s one-millionth run in 1975. I was eleven years old and this was thrilling for me to experience the buildup toward that magic number. I remember watching the Indians game and someone being stranded on third base who could have had the honor. Rod Carew almost made it but was thrown out at home plate.

Paul Molitor had a winning record every month of the season, parlaying that into a convincing victory over the rest of the league.

In notable performances: in one game, a Max Bishop struck out 6 times in his first 6 trips to the plate before drawing a walk and scoring in the 16th inning. On the season, there were 4 no-hitters, including one thrown by Tom Seaver on the 4th of July.

Molitor is joined by Roberto Alomar, Johnny Bench, Mike Hargrove, and Nellie Fox (positive run differential) in the third round. Doyle, Watson, and Bishop can try their luck in Round 2.