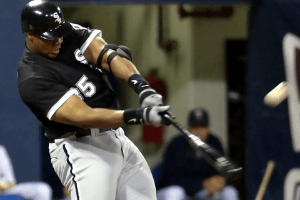 Frank Thomas is the only Hall-of-Famer in today’s competition but he is joined by some of the favorite players of my youth. Vada Pinson, Bobby Bonds, and Minnie Minoso hold a special place in my imagination. They face noted Expo, Tim Wallach, Jimmy Williams, Duke Farrell, and Ben Chapman in continuing Round One action.

Frank Thomas absolutely earned both his place in Cooperstown and his wonderful nickname, “The Big Hurt.” For nineteen years, mostly with the Chicago Whitesox, Thomas crushed opposing pitching, stroking the ball for a .301 average and picking up enough walks that his OBP was a lusty .419. His 495 doubles, coupled with his 521 home runs gave him a lifetime slugging average of .555, good enough for 19th on the all-time list. He was elected to the Hall-of-Fame on his first try in 2014.

Vada Pinson was a solid performer for eighteen seasons, hitting .286 and making four All-Star teams. Of his 2757 career hits, he laced 485 doubles, 127 triples, and slammed 256 home runs. He also stole 305 bases, which makes him an interesting combination of power and speed. He may surprise in the tournament.

My first “favorite,” Bobby Bonds caught my attention in 1973 when I found out that he was one of only three players to hit 30 home runs and steal 30 bases in the same season. It’s not as big a deal now as a total of 41 players have achieved the feat, with a few even making the 40-40 club but back then it ignited my nine-year-old brain. A three-time All-Star and three-time Gold Glove winner, Bonds hit 332 home runs and stole 461 bases during his 14-year career which makes him another speed/power threat in the tournament. I hope we get to see him in a season with his son Barry, just for fun.

A solid hitter, Tim Wallach qualified for the tournament due to his 432 doubles and 1125 RBI. He also hit 260 home runs which is a nice bonus for him. He was a five-time All-Star and three-time Gold Glove winner in his seventeen-year career.

Jimmy Williams had a short, intense, eleven-year career in which he hit .275. What qualified him for the playoff was his astounding 138 triples, including 27 as a 22-year old rookie for the Pittsburgh Pirates in 1899.

Another dead-ball era player, Duke Farrell also qualified based on his career triples with 123. He got his in eighteen seasons between 1888 and 1905 in which he carried a .277 batting average.

Ben Chapman‘s 107 triples barely qualified him for the tournament but he may surprise. He just missed qualifying with his .302 lifetime batting average and just missed with his 407 doubles. Additionally, the seasons between 1930 and 1940 were a pretty good peak.

The criminally underrated Minnie Minoso put up some great numbers despite getting a couple of years lopped off of the beginning of his career due to having the wrong color skin for Major League Baseball. Despite that, he hit .298 in what was really a fifteen-year big league career. He hit 186 home runs and drove in over 1000. He also came out of retirement for a few games with the Whitesox at age 50 and became the oldest batter to get a base hit. He is in the tournament based on his ranking in Wins Probability Added.

On the last day of the season, Ben Chapman beat Tim Wallach and Minnie Minoso lost to Bobby Bonds, leaving them in a tie for first place. In one regard, this season did not disappoint: Bobby Bonds was at the top of the leader boards in HRs, SBs, and Ks!

Minoso, Chapman, Bonds, Williams, and Frank Thomas all finished above .500 and so are heading to Round 3. The others try to qualify in Round 2.