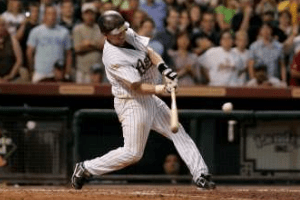 A thoroughly modern season for number 68 as Hall of Famer Craig Biggio occupies the top seed and mid-century outfielder Bill Bruton represents the oldest player. Rounding out the field are more Astros stars: Cesar Cedeno, Jose Cruz, and Jose Altuve, as well as Paul Konerko, Luis Castillo, and Troy Tulowitzki. Boy am I glad I don’t have to do a radio read on that collection of names!

Craig Biggio spent two full decades with the Houston Astros, first as an All-Star catcher and then as a Gold Glove winning second baseman. During that time he collected 3060 hits while batting a very respectable .281. He smacked 291 home runs and drove 668 career doubles, which ranked him fifth in major league history, and number one for a right-handed hitter. He scored 1844 runs and drove in over 1100. Possessing uncharacteristic speed for someone who started out as a catcher, Biggio also stole 414 bases, giving him a combination of skills that will serve him well in the playoff. He was elected to the Hall of Fame in 2015.

A hard-hitting first baseman, Paul Konerko played eighteen seasons, mostly with the Chicago White Sox, batting .279 with 439 home runs which he supplemented with 410 doubles and drove in 1412 runs. He was named to the American League All-Star Team six times.

Signed as a 17-year-old by the Houston Astros and in the majors by 19, Cesar Cedeño put together a 17-year career, hitting .285 with 199 home runs, 976 RBI, and 1084 runs scored in a low-offense era. His 550 stolen bases made him dangerous on the base paths and playing in the Astrodome may give him surprising power in the tournament. He won five Gold Gloves and was a four-time All-Star.

A teammate of Cedeño in Houston, José Cruz had a productive nineteen-year career in which he hit .284 and picked up two All-Star nods. He qualified for the tournament based on his 317 stolen bases and 1077 RBIs.

There is no denying Jose Altuve‘s talent and he seems clearly on a trajectory that is aimed squarely at Cooperstown. At 29 years old, he has nine major league seasons under his belt and already has six All-Star games, a Gold Glove, and an MVP award to his credit. His lifetime average of .315 is more than enough to qualify him for the playoff and his speed and power could make him a player to watch.

Another slick-fielding second baseman, Luis Castillo was a three-time All-Star and three-time Gold Glove winner in his fifteen-year career, ten of which he spent with the Florida Marlins. A .290 lifetime hitter, his 370 stolen bases got him into the playoff. Let’s see what he does.

In his twelve-year major league career split between the Milwaukee Braves and Detroit Tigers, Bill Bruton posted a .273 batting average with 94 home runs and 545 RBIs. Fleet of foot, Bruton led the National League in stolen bases three times and totaled 207 bases in an era when SBs were in rather short supply. His speed also helped him to pick up a tournament-qualifying total of 102 career triples.

A five-time All-Star and two-time Gold Glove winner at shortstop, Troy Tulowitzki had a promising career derailed by injuries. Still, he hit .290 lifetime with enough walks to raise his on-base percentage to .361. He qualified for the tournament based on his OPS of .856 which placed him among the leaders.

Astros great, Cesar Cedeno shook off a rough July and benefitted from Jose Cruz’s September fade to finish atop the league.

Cedeno and Cruz are joined by Troy Tulowitzki and Bill Bruton in Round 3 while Castillo and the others head to Round 2.