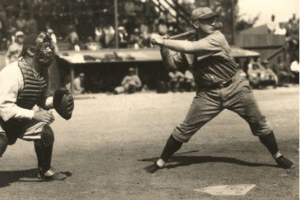 Great in the field, fleet of foot, and no slouch with the stick, Frankie Frisch qualified for the tournament in almost every category, garnering top seed for this season. He came up with the New York Giants but made his fame as part of the St. Louis Cardinals “Gas House Gang” in the 1930s. In his 19-year career, Frisch batted .316 with 2880 hits and 1244 RBI’s. He also stole an impressive for the era 419 bases and was elected to the Hall-of-Fame in 1947.

Willie “Pops” Stargell played with the Pittsburgh Pirates for 21 years, amassing an impressive array of statistics. He hit .282 with 475 home runs and 1545 RBI and a .529 slugging percentage. He was awarded the Most Valuable Player trophy for leading the 1979 Pirates to a World Series victory. A seven-time All-Star, he finished second in the MVP voting on two other occasions and was elected to the Hall-of-Fame in 1988.

One of the premier offensive threats at shortstop, Arky Vaughan put together some impressive lifetime statistics in his 14 big league seasons from 1932-1948. His .318 batting average was boosted to a .406 OBP thanks to his 937 walks. He also managed 128 triples which by themselves would have qualified him for the playoff. He was selected to the Hall-of-Fame by the Veteran’s Committee in 1985.

In his first six years in the big leagues, Chuck Klein averaged .359 with 32 home runs and 121 RBI. He wasn’t able to keep up that torrid pace for the rest of his seventeen-year career but still managed a .320 average and 300 homers. The Veteran’s Committee selected him for enshrinement in the Hall-of-Fame in 1980.

A left-handed hitter, Bibb Falk stroked for a .314 average over twelve years with the Chicago White Sox and Cleveland Indians. He also had 300 career doubles which should help in the tournament.

Dick Bartell‘s 442 career doubles earned him a slot in the playoff. In his eighteen years in the Major Leagues, he was a solid-fielding shortstop for most of his career, hitting .284.

Jose Bautista had an impressive peak few years, hitting 97 home runs in 2010 and 2011. Overall, he smacked 344 round-trippers while his .361 on-base percentage offset his .247 batting average. We’ll see if it is enough to advance.

The second African-American in the Major Leagues and the second African-American to manage a big-league club, Larry Doby was so much more than just the answer to a trivia question. He was also was a pretty fair hitter. Doby batted .283 with 243 doubles and 253 home runs in a thirteen-year career. He was selected for the Hall-of-Fame by the Veteran’s Committee in 1998.

Despite a late charge by Frankie Frisch, Arky Vaughan held on for the win. The Fordham Flash and Arky (he was born in Arkansas) tied for the lead with identical .239 batting averages vs. the league’s .212. Team Stargell had 196 homers on the season and three Stargells had 29, 30, and 31 ‘taters each.

It was a long season for Jose Bautista. In addition to his last-place finish, he also had some bad luck.