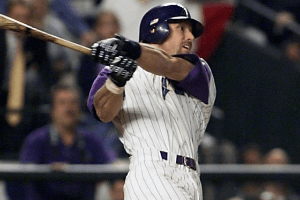 Luis Gonzalez leads in this season that features hitters from across the years. Dummy Hoy and Hall-of-Famer Ned Hanlon harken from the 19th-Century and the 20th is covered by Irish Meusel in the teens and twenties, Tommy Henrich before and after World War II, Boog Powell for the 60s and 70s, Darryl Strawberry the 80s and 90s and Adam Dunn the 2000s & teens.

Until the age of 30, Luis Gonzalez was a good hitter. Then something magic happened when he traded from the Detroit Tigers to the Arizona Diamondbacks. He went to from a lifetime .267 hitter averaging 12 homers a year to a .336 hitter with 26 home runs. By the time his nineteen-year career was over, he had compiled a .283 batting average with 354 home runs and nearly 600 doubles. A five-time All-Star, Gonzalez also hit .300 or better five times.

William “Dummy” Hoy did not let the fact that he couldn’t hear stop him from success in the big leagues; his .288 batting average over fourteen seasons is clear evidence of that. Possessing great speed, he also hit 121 triples and stole 596 bases. He also had a good eye, drawing over a thousand walks, boosting his OBP to .386. Fun Fact: He’s the reason umpires use hand signals to show balls and strikes!

If there is a poster child for the Three True Outcomes, Adam Dunn is surely on it. In his fourteen-year career, Dunn hit 462 home runs, while striking out 2379 times – that’s the third-highest all-time behind Hall-of-Famers Reggie Jackson and Jim Thome – and walking 1317 times. It should be noted that although he only carried a .237 batting average, 49.4% of his 1631 hits were for extra bases and he never grounded into more than 12 double plays in any season. We’ll see how he does!

One of my early favorites, Boog Powell had good power and a good eye, hitting .266 with 339 home runs and 1001 walks over his seventeen-year career, mostly with the Baltimore Orioles. A four-time All-Star first baseman, he finished second in the MVP voting in 1969 and won the award the following year.

On the other side of the hitting spectrum, Irish Meusel was the sort of ballplayer who put the ball in play. A product of his era, Meusel hit .310 in his eleven-year career and only struck out 199 times in over 5000 plate appearances. There are over a dozen hitters who have struck more often in a single season!

The 1983 Rookie of the Year, Darryl Strawberry could have been one of the all-time greats. A back injury and bouts with drug addiction kept him from the lofty heights his talent promised. But he didn’t do too badly for his career. An eight-time All-Star, Strawberry hit for a .259 average and slugged 335 round-trippers. His .505 slugging percentage helped to account for his 1000 RBIs.

Our only Hall-of-Famer this season, Ned Hanlon made it in as the manager of the old National League Baltimore Orioles in 1996.  He also spent thirteen seasons as a player, mostly with the NL Detroit Wolverines from 1880 to 1892 batting .259.

Although losing three years right smack in the middle of his career to military service during World War II, Tommy Henrich still had eleven good seasons, batting .282 with 183 home runs. He qualified for the tournament based on placing among the leaders in on-base plus slugging with .873.

“Old Reliable” proved to be better than advertised as Tommy Henrich surprised by topping the century mark in victories. Irish Meusel led all teams in average with a .218 batting average vs. the league’s .195. Adam Dunn, who finished in the basement, hit .156 as a team and had one hitter who only managed .138. Ouch.

Henrich and Meusel are joined by Boog Powell and Darryl Strawberry in Round 3. Off to Round 2 for the others.