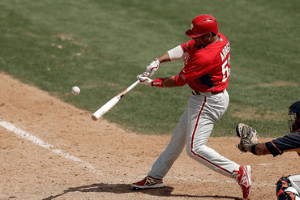 Bobby Abreu is the top seed but there are three Hall-of-Famers in Season 58. Rabbit Maranville, Jackie Robinson, and Bobby Doerr represent the greats enshrined in Cooperstown while we also get a glimpse of Ellis Burks, Ray Durham, Heinie Zimmerman, and Rusty Greer.

Bobby Abreu played very well over an eighteen-year career, long enough to stack up some Hall-of-Fame worthy numbers with a mix of power and speed. He scored 1453 runs, stacked up 2470 hits, including 574 doubles and 288 home runs. He drove in 1363 runs and stole 400 bases. On top of that, his 1476 career walks boosted his solid .291 batting average to a very respectable .395 OBP. Coupled with his .475 slugging percentage, that gives him a lifetime OPS of .870. He could do well in the playoff.

Often held up as a bad choice for the Hall-of-Fame, Rabbit Maranville was not some schmoe. While admittedly not a great hitter, he was a great fielder and managed to play long enough to rack up some big numbers in career statistics. Among his 2605 hits were 380 doubles and 177 triples, leaving him with a batting average of .258 in his twenty-three-year career. He was voted into the Hall-of-Fame in 1954.

Ellis Burks was a heckuva ballplayer. For eighteen seasons he patrolled various major league outfields and hit all kinds of big-league pitching. His lifetime statistics are noteworthy: over 1200 runs scored and over 1200 runs batted in with 352 home runs and a .291 batting average. He also tacked on 402 doubles for good measure. A two-time All-Star and a Gold Glove winner, he had a career worth following.

Ray Durham disappointed me in many ways. He didn’t become a Hall-of-Famer and, most importantly, he did not get the nickname “Bull.” Oh, well… In spite of that, Durham had an excellent fourteen-year career in which he smacked 440 doubles while batting .277. Not incidentally, he also scored 1249 runs while being named to two All-Star teams. He was a well-above-average player who was tossed on the MLB scrap heap several years too soon.

I struggle to think of any ballplayer who could have handled the stress that Jackie Robinson did when he became the first black player in modern Major League baseball. Getting a late start because of the societal factors, he was Rookie of the Year at 28, MVP at 30, and a six-time All-Star before retiring after ten seasons. He qualified for the tournament because of his .311 batting average but in a normal length career without the stress, he would have undoubtedly been a top seed.

A nine-time All-Star, Bobby Doerr nailed down second base for the Redsox for fourteen seasons, only missing 1945 because of the war. A .288 lifetime batting average, he also rapped out 223 home runs, driving in 1247 runs. A great fielder, only a bad back stopped him from playing another half-dozen years. He was named to the Hall-of-Fame by the Veteran’s Committee in 1986.

The winner of the National League’s Triple Crown in 1912, Heinie Zimmerman batted .295 in his thirteen-year career qualifying for the tournament based on his 105 triples. Accused of fixing games along with Hal Chase, he became persona non grata in baseball after the Black Sox scandal.

With an On-base Plus Slugging percentage of .865, Rusty Greer qualifies for the playoff. His brief nine-year career was marked by excellent production with 258 doubles and 119 home runs on a .305 batting average and was ended by injuries and ineffective surgeries.

This season resulted in quite a surprise for me, as Jackie Robinson trounced all comers and took first place by a healthy margin. Robby batted .253 vs. the league’s .208 as 5 teams were on the interstate. The top Robinson led the league with .283. One of the Ray Durhams had an 18-game hitting streak.

Robinson, Abreu, and Burks are joined by Heinie Zimmerman and Rusty Greer for Round 3. The others head to Round 2.