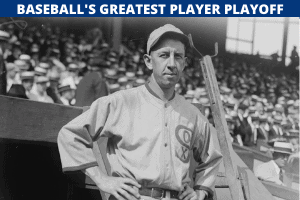 Philadelphia A’s and Chicago Whitesox great, Eddie Collins faces off against two other Hall-of-Famers and “should be” Kenny Lofton in Third Round action. Kirby Puckett and Ron Santo test their HOF credentials versus old-timer Bill Everitt and the more modern J.D. Martinez, Willie Davis, and Ellis Burks. 1 through 4 get a pass into Round 5.

Eddie Collins was the class of the league, having a winning record against all other teams and playing above .600 every month. Kirby Puckett, Kenny Lofton, and Ron Santo all made it through and Bill Everitt just missed, dropping his last five games to finish a game below .500. He will join Martinez, Burks, and Davis in the Round 4, second chance.