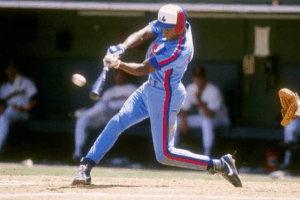 Delino DeShields has the top seed in this season and he will be taking on Taffy Wright, slugger Matt Williams, Johnny Hodapp, Hall-of-Famer Rick Ferrell, Baby Doll Jacobson, Devon White, and Torii Hunter.

Torii Hunter rebounded from a poor First Round performance and Delino DeShields won his final two games to make it to .500 while Taffy Wright cruised to a first place finish with 94 wins, 8 games ahead of the pack. Matt Williams and Baby Doll Jacobson head to Round Three while Devon White, Johnny Hodapp, and Hall-of-Famer Rick Ferell bid adieu to the qualifiers.