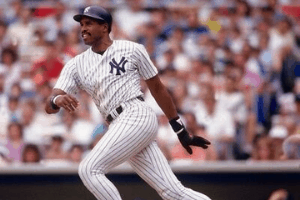 Top seed Dave Winfield is one of five Hall-of-Famers in Season 36 of the Baseball’s Greatest Player Playoff. He is joined by fellow HOFers Mr. Cub, Ernie Banks, Johnny Mize, Kirby Puckett, and Frank Chance. Rounding out the field is power hitter Albert Belle, Devon White, and John Kruk. I expect plenty of fireworks!

Extremely good for a very long time, Dave Winfield knocked 465 home runs and stroked 3110 hits on his way to the Hall-of-Fame. A twelve-time All-Star, he also picked up seven Gold Gloves in his 22-year career. Among the lifetime leaders in most of the offensive categories, Winfield is someone to watch in the tournament.

Ernie Banks won the National League MVP Award in both 1958 and 1959, one of the few who did it in consecutive years. He is also one of the three players to play over 1000 games at two different positions, in his case shortstop and first base and all with the Chicago Cubs. Best known for blasting 512 home runs in his 19-year career, Banks bears watching in the playoff.

Johnny Mize knocked 359 home runs and 367 doubles in 15 seasons – with three prime years lost to the military during World War II – split between the St. Louis Cardinals, New York Giants, and New York Yankees. Finishing with a .312 lifetime batting average, there is no telling how big his numbers would have been. Definitely a player to watch in the tournament.

For the decade of the 1990s, there might have been no more productive slugger than Albert Belle. Forced into early retirement due to an arthritic hip, he still amassed 381 home runs and 389 doubles in 12 seasons. He also batted a lifetime .295. The only hitter to have 50 home runs and 50 doubles in the same season, his kind of scary power cannot be ignored.

Before a bizarre eye ailment ended his career, Kirby Puckett was on his way to 3000 hits and 300 home runs to go with his .318 lifetime batting average. Alas, it was not meant to be. In any event, he was a ten-time All-Star and six-time Gold Glove winner and his career numbers led him to a plaque in Cooperstown.

Not only the last character in the famous “Tinker-to-Evers-To-Chance” poem, Frank Chance had a couple of career numbers that were at least worth mentioning: he batted .296 lifetime and stole 403 bases, which is what qualified him for the tournament (although his perhaps unwarranted Hall-of-Fame selection would have got him in, too).

Hailing from Kingston, Jamaica (I wonder how April in Toronto felt?), Devon White also qualified for the playoff by virtue of his stolen base total. He had 346 thefts in a big-league career that took him to the Blue Jays, Angels, Marlins, Diamondbacks, Dodgers, and Brewers.

John Kruk had a solid 10-year career that included a .300 lifetime batting average with a .397 OBP. He made the playoff by being among the leaders in Offensive Winning Percentage. I am curious as to how he will do.

I hoped for offense: Sluggers and high average hitters made up this season and expected big numbers. What I got was nothing special compared to the other seasons in the book, so far. In the end, Johnny Mize took this one. His team led in homers and his .229 batting average was second to Kirby Puckett’s .234. The league as a whole batted .210. Frank Chance owned the stolen base category.

One Albert Belle had a 3-HR game, the last being a 9th inning, lead-off, walk-off to win the game. Belle was also the victim of the only no-hitter at the hands of one of the Warren Spahns.

Mize, Chance, and Puckett are joined by Dave Winfield in Round 3. The rest head for a second chance in Round 2.

Baseball immortal Mel Ott is our top seed and is joined by fellow Hall-of-Famer Roberto Alomar in Round 3 action. Tough competition can be expected from Rip Radcliff, Stan Hack, Rocky Colavito,...

Continue Reading
link to Round 3 S32

Future Hall-of-Famer, Albert Pujols takes on current Cooperstown enshrinees Lou Boudreau and Joe Torre (in as a manager) and a solid batch of contenders including Maury Wills, Elmer Valo,...