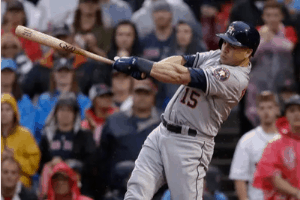 By the time Carlos Beltran closed out his twenty-year career he had played for seven teams in both leagues, been named to nine All-Star teams and won three Gold Gloves in centerfield. He also put up significant numbers in numerous offensive categories. Over 1500 runs scored and driven in, 2725 hits with over 500 doubles and 435 home runs are just some of the highlights. He even stole over 300 bases. I think he has a legitimate shot at the Hall-of-Fame.

A powerful slugger with a good eye, Jason Giambi‘s twenty-year career saw him named to five All-Star teams and win an MVP award. Lifetime, he hit 440 home runs and supplement his .277 batting average with enough bases on balls to increase his on-base percentage to a heady .399. Coupled with his slugging average of .516 gave his an OPS of .916 – good for 50th all time.

Chicago Cub legend Ryne Sandberg was the rare five-tool middle infielder, winning nine Gold Gloves and seven Silver Sluggers at second base and being named to ten All-Star teams in his sixteen years in the big leagues. In addition to stealing 344 bases, he was also good for 282 home runs and a .285 batting average. He was elected to the Hall of Fame in 2005.

According to the opinions of many who saw him play, Hal Chase was one of the greatest fielding first basemen to ever play the game and was a damn fine ballplayer. In his fifteen-year career, he garnered over 2000 hits and a .291 batting average, stealing 363 bases. Unfortunately, he was also widely considered to be poison to a team’s chemistry and suspected of fixing games, even possibly being involved in the Black Sox scandal. On his deathbed, he denied any involvement.

By all accounts a sketchy-fielding outfielder, Taffy Wright could flat HIT. In a nine-year career interrupted by three years of military service during World War II, Wright hit a healthy .311, qualifying him for the playoff.

A .294 lifetime hitter, Fred Tenney qualified for the tournament based on his 1278 runs scored. In his seventeen seasons between 1894 and 1911, he revolutionized the playing of first base and was widely considered to be second only to Hal Chase (see above) in fielding prowess.

Hub Collins only played for seven seasons but in that time he stole 335 bases. This was between 1886 and 1892, so take that statistic for what it’s worth – you know, different rules. He hit .284 and was cut down in his prime at 28, contracting typhoid fever while playing for the Brooklyn Grooms and while “Typhoid Mary” Mallon was in New York. Who knows?

Ryan Braun qualified for the tournament based on his On-base Plus Slugging back when I was making the list of players. Since he is still active, he has been adding to his lifetime totals and now would have qualified based on his 344 home runs. He also has 401 doubles and a lifetime batting average of .298. At only 35 years old, he looks to have a better than average shot at making the Hall-of-Fame after he retires.

Current star, Ryan Braun, turned the power up to ELEVEN after the 4th of July. He went 45-18, a .714 clip, to best the competition. Although he finished in fifth place, Taffy Wright led all teams in batting average with .233 vs. the league’s .211.

Braun and Sandberg head to Round 3 along with Hub Collins and Carlos Beltran. The others head to Round 2 for a second chance to qualify.