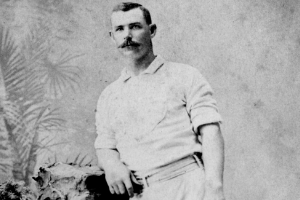 A great but not flashy hitter of the nineteenth century, Roger Connor played for eighteen years, stacking up impressive career totals. His .316 lifetime batting average included some of the best slugging numbers of the era. He hit 441 doubles and retired as the all-time leader in triples with 233 and home runs with 138. In fact, it was his record that Babe Ruth broke. How it took until 1976 for him to be inducted into the Hall-of-Fame is beyond my understanding.

The 1972 Rookie of the Year, Carlton Fisk went on to a long and productive career. His twenty-four years in the majors split between the Boston Redsox and Chicago White Sox included eleven All-Star games as a catcher and steady offensive performance from the physically demanding position. In all, he played 2499 games, scored 1276 runs while gathering 2356 hits. Among them were 421 doubles and 376 home runs. He also managed to drive in 1330 runs while batting .269. “Pudge” was elected to the Hall-of-Fame in 2000.

Jimmy Dykes played for 22 seasons and managed for more than 20 more, watching as the game was transitioning from the dead-ball era through to expansion. What he must have seen! Solid with his glove at all the infield positions, as a hitter he also got the job done. He supplemented his .280 lifetime batting average with 958 walks to raise his OBP to .365 and 453 of his 2256 hits were doubles.

A nine-time All-Star, Rocky Colavito could hit the long-ball. He went yard 374 times in his fourteen-year career and knocked in 1159 runs. Although his lifetime average was an uninspiring .266, he could take a walk, boosting his on-base percentage to a solid .359. Don’t Knock the Rock!

Barney McCosky is another entry in the “What if” file. World War II robbed him of three peak years and a severe back injury swiped another decade. Still, he hit .312 in his eleven seasons, collecting 1301 hits with only eight seasons as a full-time player.

A dead-ball era slap hitter, Roy Thomas hit .290 in thirteen big league seasons. An expert at fouling off pitches (he might have been the impetus for the foul-strike rule), he led the National League in walks seven times for the Philadelphia Phillies which boosted his OBP to a spectacular .413. To give you some idea of the type of hitter he was, his lifetime slugging percentage was only .333.

Over the course of his twelve-year Major League career, Richie Sexson slugged 306 home runs, knocked in 943 RBIs and hit a solid .261 with a .507 slugging percentage.

A good defensive catcher, Rick Ferrell was a solid .280 hitter during his career with an OBP of .378, good for the eighth-best among catchers. He didn’t strike out much and as soon as they started having All-Star Games in 1933, Ferrell was the catcher for the American League, a role he fulfilled for the next six years and eight times overall. He was voted into the Hall-of-Fame by the Veteran’s Committee in 1984.

Early 1900s outfielder, Roy Thomas won 7 of his last 10 to roar past 19th century Hall of Famer, Roger Connor to take first place in the season. Barney McCoskey led the league in batting average with .246 vs. the league’s .206 but Thomas’ prodigious walk totals more than made up for the deficit.

Thomas, Connor, McCoskey, and Rocky Colavito head to Round 3, while the others get a second chance to qualify in Round 2.