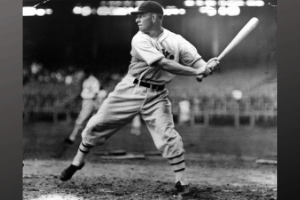 I am always surprised at how little regard Mel Ott is given when discussions are had about the great ballplayers of the past. Sure, his numbers have been surpassed over the years but when he retired, he ranked number three in lifetime home runs with 511 behind Babe Ruth and Jimmie Foxx. He also had patience at the plate which garnered him a large number of walks so that his .304 average was boosted to a .414 OBP. I think he bears watching in the tournament.

In a 19-year career, Chili Davis drew a lot of bases on balls and hit more than his fair share of home runs – 1194 and 350 to be exact. Three times an All-Star, he never really had a breakout year but was consistently very good for a very long time.

Hall-of-Famer Edd Roush and his .323 career batting average should make it through a few rounds of the Greatest Player Playoff. Although he played at a time when there weren’t many home runs hit, he made up for it by slamming 182 triples and 339 doubles.

Don Mattingly‘s seemingly inevitable induction in Cooperstown was derailed by a chronic bad back. In spite of this, “Donnie Baseball” still managed a career average of .307 and 222 home runs. A six-time All-Star with nine Gold Gloves to his credit, he really ought to be in the Hall.

Fleet of foot, Delino DeShields stole 463 bases in his thirteen-year career, most of which was spent in the national league.

Larry Gardner was a third baseman, mostly for the Red Sox and Indians from 1908 – 1924. He made the playoff by hitting 129 triples in his career.

Tommy Tucker played in the American Association and National League before 1900. He had a reputation for riding his opponents and their fans earning him the nickname “Tommy Talker.” His 352 stolen bases just snuck him into the tournament but he also hit .290 for his career. He may surprise.

Perhaps most well-known as the Home Run King before some guy named Ruth came along, Gavvy Cravath got an invite to the tournament based on ranking among the leader in OPS – On-base Plus Slugging. I think he will do well when you consider how much better his power numbers were than his contemporaries.

Despite a 15 – 14 April, Mel Ott cruised to victory in season 27. Delino DeShields came within a hair’s breadth of making the cut. Dropping seven of his final 10 games proved to be his undoing. The Edd Roush team led in average and Ott in homers with two Otts totaling 30 on the season. The entire Don Mattingly team stole a total of 8 bases (vs. 23 CS) and Ott8 suffered 13 HBP!

Ott, Roush, and Gardner are joined by Gavvy Cravath in Round 3. The others will have their second chance to move ahead in Round 2.