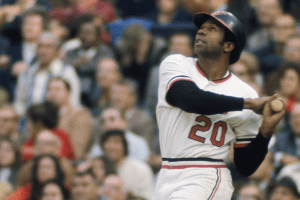 I can’t say enough about the great Frank Robinson. He pinged my baseball imagination as few other players had. He came to Cleveland in 1974, which was in my early years as a rabid baseball fan. He became the first “Black” manager in major league history – a fact I found absolutely astounding. He was the first “real” player-manager in decades – How cool was that? Diving into his player bona fides he was clearly an all-time great: The only player to be named MVP in both leagues, over 500 home runs, almost 3000 hits, a batting average approaching .300, and he won a Triple Crown! On top of that, I was listening to the game on opening day 1975 when he hit his historic home run. There was no choice but for him to become one of my favorites. I suspect that when a “good” system emerges for evaluating player value across eras, Frank Robinson will be considered among the top few players in history.

Dave Orr had a comet-like career that was cut short by a stroke after only seven full years. Orr managed to blaze across the baseball world of the 1880s with 108 triples, a .342 batting average, and a slugging average of .502 where the league average was in the .320s. A contemporary of fellow league member, Charlie Comiskey, his is a true tale of “what might have been.”

A 19th-century standout, Harry Stovey, must have been fast: he stole a great many bases and hit almost 200 triples in a 14-year career. The first Major League player to pass the 100 career home run mark, he was a dominant hitter during the 1880s and a case can be made for his inclusion in the Hall-of-Fame. His 176 triples and 509 stolen bases are what qualified him for the tournament.

Sure, Charlie Comiskey made his name (and was elected to the Hall-of-Fame) because of his prominent stature as the owner of the Chicago White Sox, but he was also a ballplayer prior to that. In fact, his 416 (credited – record keeping in the 19th century wasn’t as accurate as it is now) stolen bases qualified him for the tournament.

Dolph Camilli has long been one of my “secret” favorites. He was twice an All-Star for the Brooklyn Dodgers and I think I had a strat card of him that performed particularly well. In any event, his 947 career bases on balls earned him a slot in the tournament. I hope his power serves him as well.

Gabby Hartnett was a Hall-of-Fame catcher for the Chicago Cubs. HOF status would have been enough to get him into the tournament but he also is amont the all-time leaders in WAR. Let’s see if that pays off for him.

If you look up consistency in the dictionary, don’t be surprised if you find Torii Hunter’s picture next to the definition. Seventeen full years in the big leagues and he managed a .277 batting average, 353 home runs, and 1391 RBI. I will not be surprised if he does well in the tournament.

It took 14 innings, but Frank Robinson won on the last day of the season. That pulled him into a tie with 19th-century standout, Dave Orr. Orr’s .282 team average crushed the rest of the league, which came in at a paltry .194. The various Orrs dominated the leader boards in average, hits, doubles, and triples, while Robinson99 tied Dolph Camilli for the home run lead with 26. One Harry Stovey suffered 11 HBPs.

Robinson, Orr, Stovey, Hartnett, and Camilli all finished above .500, so they go on to the Third Round. The rest try their luck in Round 2.