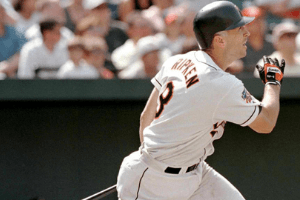 Carlos Delgado was consistent throughout and put on a burst in the last month of the season to take the pennant in Season 22. Second through seventh were in the hunt for a place in Round Three and five teams finished above .500 to advance: Hall-of-Famers Gary Carter and Bobby Doerr, Ross Barnes, and Lance Johnson all move on. Just missing was Bibb Falk. He Cal Ripken and Monte Cross are out.