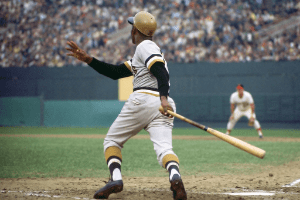 Roberto Clemente is our only Hall-of-Famer in Season 61. He mixes it up with two of his contemporaries: shortstop Bert Campaneris and outfielder Jose Cardenal, and others from across baseball history. From the modern era, we see Carlos Delgado and Derrek Lee and as we go further back we find Rip Radcliff, Del Pratt, and Socks Seybold.

A great fielder with a howitzer hanging off his shoulder, Roberto Clemente was also one of the great hitters in the history of the game. His .317 lifetime average allowed him to gather exactly 3000 hits before his untimely death. Playing much of his games in the cavernous Forbes Field for the Pittsburgh Pirates made it difficult to hit home runs but he still managed 240 of them. But he took advantage of that same spaciousness to rack up 440 doubles and an impressive 166 triples. He led the league in batting average four times and won an astonishing 12 Gold Gloves and was named to fifteen All-Star teams. Clemente was voted into the Hall of Fame in a special election in 1973, not having to wait the requisite five years after the end of his career.

Once he became a regular for the Toronto Blue Jays, Carlos Delgado proceded to become a star. Over the next thirteen years, he never hit less than 24 home runs in a season, totaling 473 for his career. He also slugged 483 doubles, scored 1241 runs, and drove in 1512. His batting average was a very respectable .280 but his 1109 walks raised his OBP to .383. That, coupled with his .546 slugging percentage gives him an OPS of .929, good enough for 38th place on the all-time list.

A lifetime .259 hitter, Bert Campaneris qualified for the playoff based on his 649 stolen bases and 1189 runs scored over his nineteen seasons. A six-time All-Star, he is what the Swingin’ A’s GO!

A real slugger, Derrek Lee had 1959 hits in his fifteen-year career and 40% of them were for extra bases. He slammed 432 doubles and 331 homers which contributed to his .495 slugging percentage.

Stuck in the minors until he was 28 and not a regular until the next year, Rip Radcliff got seven years as a regular to bang out 1267 hits for a .311 average. Relegated to pinch-hitting for his last two years he cut his career short by enlisting in the Navy for World War II.

A fine-fielding second baseman, Del Pratt was a dead-ball era slugger, driving 392 doubles, 117 triples, and even 43 home runs with a .292 average over his thirteen years in the big leagues. He followed his major league career with eight more seasons as a player-manager in the minors.

Jose Cardenal played for nine teams in eighteen big league seasons, batting .275 through the barren offense of the 1970s. He just qualified for the tournament based on his 329 career stolen bases. In a coincidence, he is a cousin of Bert Campaneris!

A founding member of Connie Mack’s Philadelphia Athletics, Socks Seybold was another dead-ball slugger. He hit .294 in his 7 seasons and in 1902 he set the single-season home run record with 16 which he held until some guy named Babe Ruth hit 29 in 1919. He is in the tournament for placing in the Offensive Winning Percentage category.

Roberto Clemente batted .240 as a team to win the season quite handily. The league batted .209 and Bert Campaneris was the top base stealer but, clearly, that wasn’t enough to get him out of the cellar.

Clemente and Lee are joined by Rip Radcliff and Socks Seybold in Round 3. The others try their luck in Round 2.