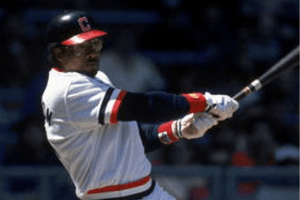 Hero of my youth, Andre Thornton owns the top seed facing a panoply of stars including Giancarlo Stanton, Gary Redus, Juan Samuel, Eddie Joost, Buddy Myer, Gary Gaetti, and Hall-of-Famer Bill Mazeroski. Only the top 4, plus anyone with at least a .500 record, will advance.

Giancarlo Stanton dominated in the season, joining the 100 Win Club in and finishing 22 games ahead of second-place Gary Redus. Buddy Myer and Eddie Joost will also be moving on to Round Three. Sadly, we bid farewell to Andre “Thunder” Thornton, Hall-of-Famer Bill Mazeroski, Juan Samuel, and Gary Gaetti.