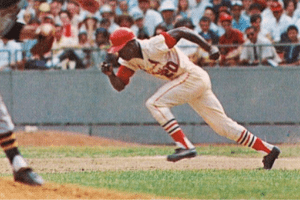 Lou Brock, Deacon White, and Ray Schalk represent the Hall-of-Fame here in Season 51. They are paired with some powerful hitters such as Andres Galarraga and Don Baylor as well as John Stone, Eddie Joost and Michael Bourn.

You can be forgiven if all you know about Lou Brock is his ability to steal a base. After all, he was successful over 75% of the time and he did it a lot – 938 times in his nineteen years with the St. Louis Cardinals and Chicago Cubs and retired with both the single-season and career records. But Brock could hit, too. His .293 career average came on 3023 hits, among them 486 doubles, 141 triples, and even 149 home runs and scored 1610 runs. A six-time all-star, he was elected to the Hall-of-Fame in his first year of eligibility, 1985.

A five-time all-star and two-time Gold Glove winner, Andres Galarraga hit .288 in his nineteen years in the big leagues. He scored 1195 runs with 2333 hits, including 444 doubles and 399 home runs, driving in 1425, some pretty impressive numbers.

I always liked Don Baylor as a player. Good power – 338 home runs, good speed – 285 stolen bases, and the ability to get on base in whatever way worked – a .342 OBP and was hit by pitched balls 267 times in his nineteen-year career. My kinda ballplayer.

John Stone’s promising career was cut short in 1938 when it was discovered that he had contracted tuberculosis, which in the days before antibiotics was very difficult to treat. Even so, in eleven big-league seasons with the Detroit Tigers and Washington Senators he played in 1200 games and posted a lifetime batting average of .310 with a .376 on-base percentage.

Hall-of-Famer and baseball pioneer Deacon White played for twenty seasons, beginning with the Cleveland Forest Citys of the old National Association in 1871. He was regarded as the best catcher in baseball during the gloveless time when the catcher was the most important position. His lifetime .312 average qualified him for the playoff and he probably deserved being included just for his spectacular mustache.

Eddie Joost was a good fielding shortstop who managed to play for seventeen seasons despite only batting .239 during his career. What was his secret sauce? Over 1000 walks that boosted his OBP to a healthy .361 and qualified him for the tournament.

Michael Bourn and his 341 lifetime stolen bases are in the playoff. He hit .266 in his eleven years in the Major Leagues, making two All-Star teams and winning a pair of Gold Gloves.

Ray Schalk is not in the Hall-of-Fame because of his hitting or his speed but for his stellar play behind the plate. He sort of invented the modern method of backing up the infield on hits to the outfield. But he did hit a little, hitting .253 with a .340 OBP in his eighteen-year career.

With ten games remaining, it was a three-way race between Deacon White, Don Baylor, and Lou Brock. White finished 7-3 to take the top slot. White also led all teams in batting average with .243 while the league hit .202. One Brock was a notable outlier, leading the league’s hitters with a .273 average while the rest of the Brock’s only managed .214.

White, Baylor, and Brock are accompanied by Michael Bourn and John Stone as they make their way to Round 3. The others head to Round 2 for their second chance to qualify.