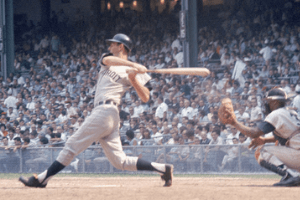 Al Kaline flew somewhat under the radar for most of his career and despite missing many games due to injuries still managed to play 2834 games in his 22 seasons with the Detroit Tigers. That large number of games, coupled with consistent if not flashy production allowed him to garner 3007 hits, 498 doubles, and 399 home runs with a .297 batting average. Named to eighteen All-Star teams and the winner of ten Gold Glove awards, “Mr. Tiger” was elected to the Hall-of-Fame in his first year of eligibility in 1980.

Starting off as a catcher for the 1887 Louisville Colenols, Lave Cross eventually transitioned to third base and became a well-regarded fielder, eventually playing in 2277 games with nine different teams in his 21 seasons and modernizing defensive play at the hot corner. He hit .292, while racking up 2651 hits and scoring and knocking in over 1300 runs.

Another converted catcher, B.J. Surhoff split his nineteen seasons with the Milwaukee Brewers and two tours with the Baltimore Orioles (with a couple of years in Atlanta for the Braves). During that time he got into 2313 games and hit a respectable .282 with 440 doubles.

A solid ballplayer for seventeen seasons, Buddy Myer managed a .303 batting average with over 2000 career hits, 130 of them triples. He was also the possessor of a keen batting eye, garnering 965 walks and boosting his on-base percentage to a healthy .389.

Rookie of the Year in 1997, Nomar Garciaparra won two batting titles and was named to six All-Star teams in his 14 big-league seasons. A lifetime .313 hitter, which qualified him for the tournament, he’d probably be in the Hall-of-Fame if he had stayed in Boston for his entire career.

Another Criminally Underrated Player (TM) of the barren offensive era of the late 1960s – early 1970s (he led the American League in 1974 with only 32 home runs!), Dick Allen nonetheless put up some pretty solid numbers in his fifteen-year career. Overall, he hit .292 with 351 home runs, looked pretty bad-ass in his oversized sunglasses, and really ought to be in the Hall-of-Fame.

A long-time Kansas City Royal, Amos Otis was another of my early favorites. Why? I cannot remember! But I do know that “A. O.” was a career .277 hitter who picked up over 2000 hits, scored over 1000 runs and drove in 1000 more. He qualified for the tournament based on his 341 stolen bases.

Pedro Guerrero qualified for the playoff by finishing among the leaders in offensive winning percentage – and I can see why. He hit an even .300 over his fifteen seasons and also managed to swat over 200 home runs while occasionally stealing a base. He was a five-time All-Star.

Tied with 10 games to go, Dick Allen and Pedro Guerrero both finished 7-3 in their last ten games to land in a dead heat for first. Al Kaline led all teams in batting average with .229, while the league hit .216. All in all, it was a tight finish as the Amos Otis team brought up the rear with .206.

Allen, Guerrero, Kaline, and Otis advance to Round 3 and the others head to Round 2.