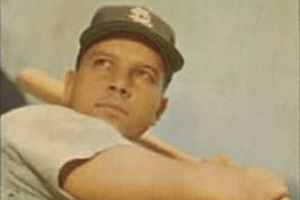 Tiger slugger Vic Wertz has the top seed in this season and will have some long-ball competition from Bob Elliott, Lew Fonseca, Fred McGriff, Andruw Jones, Roy Sievers, Orlando Cabrera, and Jose Altuve. Top four finishers and anyone over .500 advance to Round Three.

On opening day, the leadoff Roy Sievers hit a home run (I like to think of it as being on the first pitch) and then proceeded to hit two more in the same game. Quite a start to a season that saw the team lead in slugging and OPS and parlaying it into a first-place finish, besting Bob Elliott by two games. Fred McGriff and Vic Wertz finished 3 and 4 with Andruw Jones qualifying for the Third Round as well by virtue of his .500+ record. Lew Fonseca, Jose Altuve, and Orlando Cabrera will not advance to the next round.